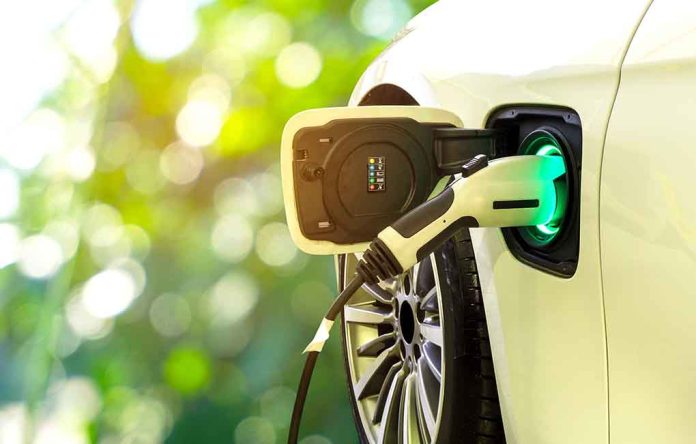 (USNewsMag.com) – While New York, Oregon, and California have enacted legislation designed to ban the sale of new gas-powered vehicles by 2035, Wyoming is proposing a law that would ban electric vehicles in that same year.

State lawmakers in Wyoming claim that “the proliferation of electric vehicles at the expense of gas-powered vehicles” would be “detrimental to Wyoming’s economy” and the rest of the country as well. Citing a lack of infrastructure to support EVs and dispose of the massive batteries that power the cars, as well as the need to protect the stability of The Cowboy State’s oil and gas industry.

While a growing list of states support gas-powered vehicle bans, such a move is likely to be widely unpopular in the more rural states whose residents have not been eager to make the switch. According to Electrek, only .04 percent of vehicles, about 510, in Wyoming are electric. States with similarly low numbers of EVs registered to their residents include the Dakotas, West Virginia, Montana, and Mississippi.

Currently, the only U.S. manufacturer to produce only electric vehicles is Tesla, owned by Elon Musk. General Motors has announced its intention to transition to “zero-emission” vehicles by 2035, while Ford has not stated a timeframe to make the switch.

While blue states place their faith in an EV future, problems with the new technology continue to arise. During the 2022 hurricane season, Florida officials faced flood-damaged vehicles that burst into flames. In some cases, they reignited hours after the fire had been put out. Putting out the fires required more than 10 times the amount of water necessary for a gasoline-powered engine, some 8,000-12,000 gallons. Local officials faced with EV fires believe saltwater was a major factor in the damage and cite that some of the storms in 2022 hit areas with a “high penetration of electric vehicles,” increasing the number of EV infernos.

During a heatwave in August of 2022, the State of California asked residents not to charge their electric vehicles to avoid straining the power grid. California leads the nation with 425,300 registered EVs.