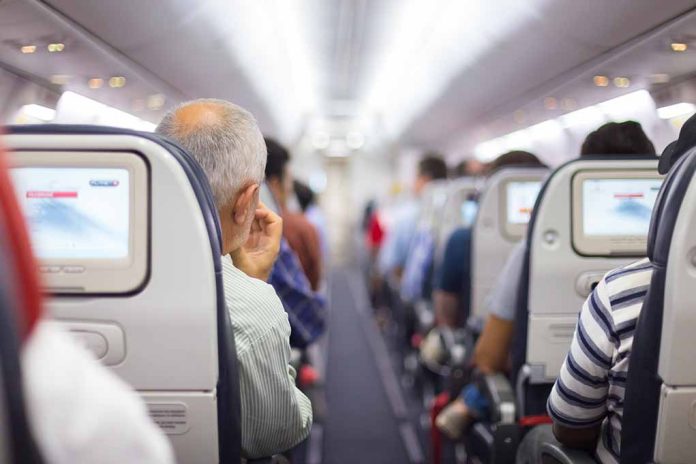 (USNewsMag.com) – Violence on planes has been a serious issue in the wake of the COVID-19 pandemic. A recent video illustrated just how bad it has been. Now, the woman in the video has reportedly been identified.

Patricia Cornwall, 51, was traveling from Tampa, Florida, to Atlanta, Georgia, when she became enraged. She started yelling at an elderly man who was eating and telling him to put his mask on. He refused, telling her he was allowed to eat with it off. After some back and forth, she began hitting the man and spit in his face. Atlanta police met the plane at the gate and took the woman into custody. She was reportedly under the influence of alcohol when the assault took place. The FBI later took over the case.

According to reports, Cornwall is a former NFL cheerleader, Baywatch actress and Playboy model. The incident on the plane also wasn’t the first time she has reportedly had a run-in with the police.

The New York Post reveals “Delta Karen” was arrested for driving under the influence in Florida and allegedly assaulted the police officers who tried to take her into custody. She’s set to go to court on January 10, for that case.

In addition to the DUI and plane assault, Cornwall’s stepfather, Robert Spoeri, filed a restraining order against her. She was accused of attacking him and her mother, Yolanda Spoeri, and threatening to kill them while she was living in their home. The case was later dismissed.

Clearly, Cornwall is a danger to the public and needs help before she hurts anyone else.