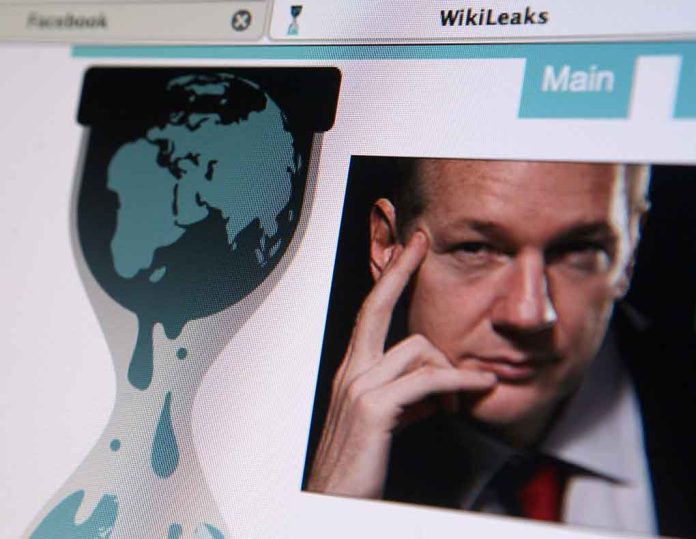 (USNewsMag.com) – Wikileaks Founder Julian Assange is currently in a London jail while the US Justice Department tries to extradite him to the US. He’s facing 18 charges for publishing classified government documents on his website. Before possibly going to America to face a judge, Assange made a life-changing decision.

On Wednesday, March 23, Assange married his girlfriend Stella Moris at Belmarsh Prison. Before the ceremony, Moris penned an op-ed for The Guardian, discussing the couple’s right to marry. She said Assange is the love of her life and an incredible dad to their two sons. Moris called her now-husband a “political prisoner” and said their jailhouse wedding isn’t how the ceremony should have happened. Nonetheless, she called the ceremony a “declaration of love and resilience… in spite of the political prosecution” inflicted on their family.

Stella Moris speaks movingly about her wedding to Julian Assange today: "Today I will go through the gates at the most oppressive high security prison in the country and be married to a political prisoner, WikiLeaks founder Julian Assange" #AssangeWeddinghttps://t.co/2CtaZgpjdR

The couple’s wedding included two official witnesses, four guests and two guards. They were not allowed to pose for photographs to mark the occasion because of the prison’s strict security policies. Moris posed for photos before the wedding with her children and family.

Stella Moris with her and Julian's two small boys Gabriel and Max outside London's Belmarsh prison. It's Julian and Stella's wedding day! pic.twitter.com/cSeCeST6nE

Earlier this month, Britain’s Supreme Court refused to allow Assange to appeal his extradition to the US. The ruling cleared the way for him to go to America to face charges that could put him in prison for life. His legal team could still decide to try to bring his case before the European Court of Human Rights.