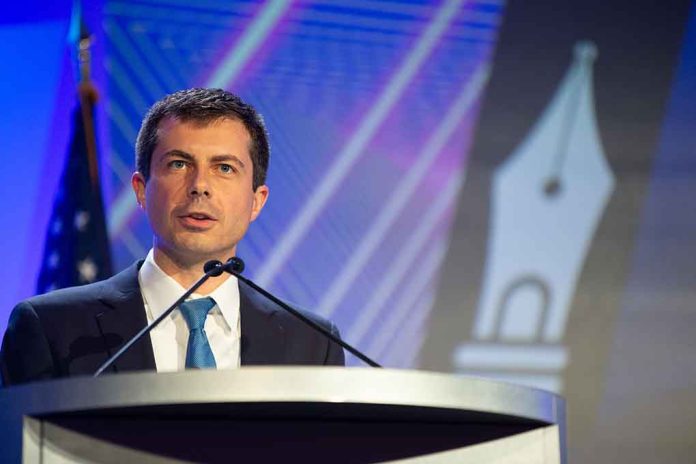 (USNewsMag.com) – The White House continues to defend Transportation Secretary Pete Buttigieg despite a string of major transportation catastrophes that have occurred since his appointment to the position. Ronald Klain responded to an Axios article that was slightly critical of Buttigieg, calling it a “ridiculous take” and claiming the Transportation Secretary “has done an incredible job” tackling the many challenges that have plagued the sector in the past two years.

The list of major transportation disruptions under Secretary Buttigieg’s leadership includes problems with transport and travel in nearly every sector that falls under the Department of Transportation’s authority.

The supply chain crisis of 2021 saw ships waiting for weeks to unload at major ports, cargo train backups stretching for dozens of miles at rail yards, and trucking nightmares caused by a lack of drivers. Buttigieg was on paternity leave at the time, busy dodging important meetings, which led to criticism despite blaming the issue on the pandemic lockdowns.

In 2022, among other issues, Congress was forced to step in to avoid a railroad strike that would have crippled freight transport nationwide. Not long after, holiday travel devolved into chaos when Southwest Airlines canceled over half of its scheduled flights. The cancellation fiasco was blamed on aging computer systems. In October of the previous year, Southwest canceled over 2,000 flights in four days, blaming the weather and lack of staff.

In the first few weeks of 2023, Buttigieg faced fresh criticism after the Federal Aviation Administration was forced to ground all U.S. flights for several hours due to a safety system outage blamed on a “corrupted file.”

The ongoing transportation issues have led to increased bipartisan criticism of the former presidential candidate. In June, Representative Ro Khanna accused the Department of Transportation of being “way too timid” in its approach to airline issues. Senator Ted Cruz, who opposed Buttigieg’s confirmation in the first place, called the issues “completely unacceptable” and an “example of dysfunction” in the DoT. Many have renewed the question of Buttigieg’s qualifications, an issue that first arose shortly after his selection by President-elect Joe Biden.