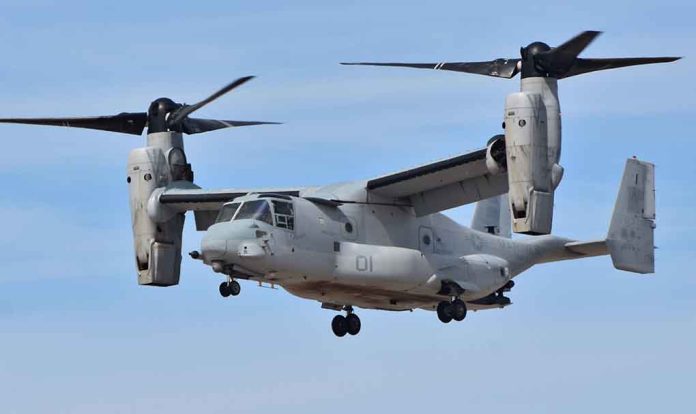 (USNewsMag.com) – It’s no secret that military members have dangerous jobs. They go to chaotic locations across the world to serve their country and know there’s a possibility they might not make it home. When they’re at home, though, they should be safe. Unfortunately, that’s not always the case.

On Wednesday, June 8, five Marines died when the aircraft they were in crashed. The accident happened around 12:30 p.m. Pacific Time in the Southern California desert about 150 miles east of San Diego. According to the Marines, the victims, who were part of the Marine Aircraft Group 39, 3rd Marine Aircraft Wing, experienced an “aviation mishap” on board an MV-22B Osprey.

Major General Bradford J. Gering, the commander of the unit, said the Marines would “mourn the loss” of those who died. He sent condolences to the families and friends of the victims.

“We mourn the loss of our Marines in this tragic mishap. Our hearts go out to their families and friends as they cope with this tragedy.” – Maj. Gen. Bradford J. Gering, @3rdmaw Commanding General https://t.co/RMuLkK5ez4

The crash on Wednesday wasn’t the only Osprey crash this year. In March, Marines were Norway conducting a joint training exercise with NATO when the aircraft crashed, killing four service members. The crash happened in extreme weather conditions. According to NBC News, 30 people died in crashes on the Osprey aircraft before it went into service in 2007.

An investigation into the latest accident is ongoing; currently, investigators are recovering the equipment at the crash site.