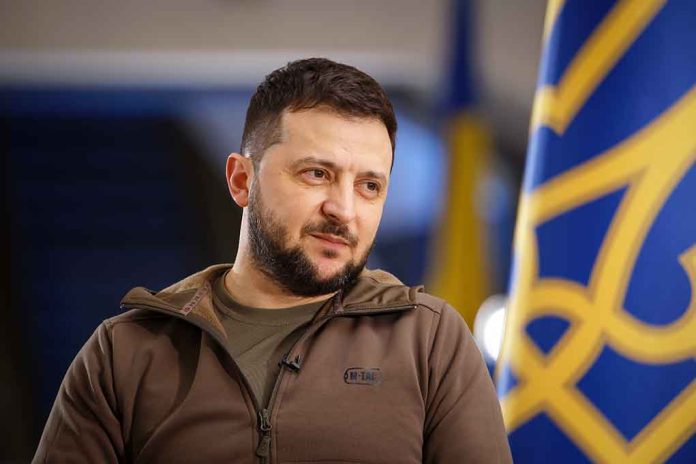 (USNewsMag.com) – Ukrainian President Volodymyr Zelenskyy visited Washington, DC on Wednesday for the first time since the war with Russia broke out nearly a year ago. The visit consisted of a press conference with President Joe Biden and an impassioned speech to Congress during the evening. Zelenskyy pressed forward, using the victories they’ve already achieved as he tried to convince congressional members why Ukraine may benefit from additional financial and military assistance.

On my way to the US to strengthen resilience and defense capabilities of 🇺🇦. In particular, @POTUS and I will discuss cooperation between 🇺🇦 and 🇺🇸. I will also have a speech at the Congress and a number of bilateral meetings.

The visit marks a turning point in the ongoing war between Ukraine and Russia, as well as a strengthening of the relationship between the US government and the Ukrainian government. While many Republicans have supported the visit, there are others that remain skeptical of the significant amount of money that continues to flow toward Ukrainian efforts with little oversight when it comes to where that money is actually going.

Good morning. The US Congress is about to send another $44 billion to Boeing, Raytheon and the CIA "for the war in Ukraine."

The entire Russian military budget for the year is $65 billion.https://t.co/wszK7RHFos

Shortly before Congress is expected to go into recess for the holidays, and amid looming recession fears, representatives have passed a monstrous omnibus spending bill that would include more than $45 billion in additional economic and military aid to Ukraine. The timing could not be any worse, according to several non-mainstream GOP members.

Senator Rand Paul has been critical of not just this omnibus bill, but of previous spending bills that have allocated billions of dollars in additional assistance to Ukraine. Back in May, Paul was purposely delaying approval for $40 billion, demanding that the foreign aid package include an inspector general to monitor spending. Unfortunately, not everyone was on the same page as him, and the bill ended up passing without the protective measure in place.

Other Republicans are being vocal with their concerns about this new bill and how it could worsen inflation and the US economy, increasing the nation’s existing debt. Others, such as Rep. Thomas Massie (R-KY), are increasingly concerned about the lack of an auditory process.

This is wrong. We should have a separate vote on additional Ukraine funding. Most of my constituents do NOT wish to have their money sent to Ukraine, especially not without oversight or an audit. pic.twitter.com/TkdRJVyKtV

Republican Georgia Representative Marjorie Taylor-Greene criticized the visit ahead of time, sarcastically referring to Ukraine as the country’s unofficial “51st state” due to all the aid they have been receiving.

Of course the shadow president has to come to Congress and explain why he needs billions of American’s taxpayer dollars for the 51st state, Ukraine.

While Zelenskyy’s visit is important, I can’t help but wonder if it was the right call at this time. It’s good to see our elected officials committed to working against foreign adversaries such as Russia’s Vladimir Putin, but to what extent? Will blank checks be issued to Ukraine endlessly, or will there be a limit?

The State Department also approved nearly $2 billion more for Ukraine on Wednesday, including funds for a Patriot missile battery system and other sophisticated instruments of war.

The GOP wing of the House seems like it is preparing to put up bigger fights against approving additional financial packages for foreign aid once the 118th Congress is sworn in. Let’s see if that’s true.