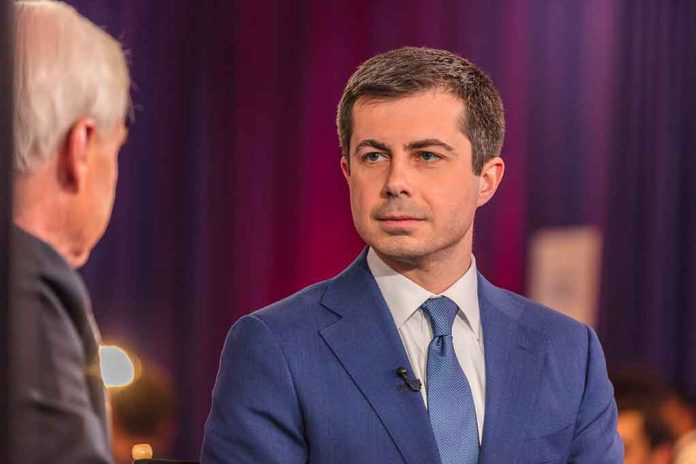 (USNewsMag.com) – The Biden administration praises itself for being pro-union and pro-worker But just days before a rail worker strike was predicted to begin back in early September, Transportation Secretary Pete Buttigieg was spotted vacationing in Europe. The information was revealed by the Washington Free Beacon this Wednesday.

Buttigieg had apparently tuned in to many of the urgent meetings that took place during this period virtually or via phone. Americans are just learning of this now because many union workers are unsatisfied with the negotiations that took place then, and most recently with what President Biden signed into law.

Many rail workers were threatening strikes because they felt their needs were unheard. Even after talks with President Biden and Pete Buttigieg, their desires for paid sick leave were not met. The irony is that the Democrat administration campaigned for the votes of blue-collar workers, only to turn around and leave them feeling used.

If Buttigieg had nothing to hide and was not doing anything wrong, why keep his European trip under wraps? Why allow for the media to “expose” him now rather than being honest and transparent with the people from the get-go? It makes him look even worse when he did not do enough to pressure paid sick leave for working-class Americans while he took off four weeks of paid parental leave to be with his adopted newborn children.

Several legislators, including Republican Senator Josh Hawley (MO), criticized Buttigieg the moment his trip was made public. Hawley said, “Pete Buttigieg will take a paid vacation in Europe for days on end but doesn’t think rail workers should get more than one day of sick leave. The country would fall apart if rail workers showed up for work as rarely as Buttigieg does.”

.@HawleyMO: "Pete Buttigieg will take paid vacation in Europe for days on end but doesn't think rail workers should get more than one day of sick leave … If rail workers showed up for work as rarely as Buttigieg does, the country would fall apart." https://t.co/hKYMd8ABuT

A poorly timed vacation is more evidence that neither Buttigieg nor anyone else in the Biden administration took workers’ demands seriously. Two strike threats later, Biden not only willingly signed into law legislation that failed to include paid sick leave for rail workers, but he also encouraged Congress to force a contract that most rail workers disagreed with. If that isn’t indicative of someone that does not side with blue-collar workers, I’m not sure what is.