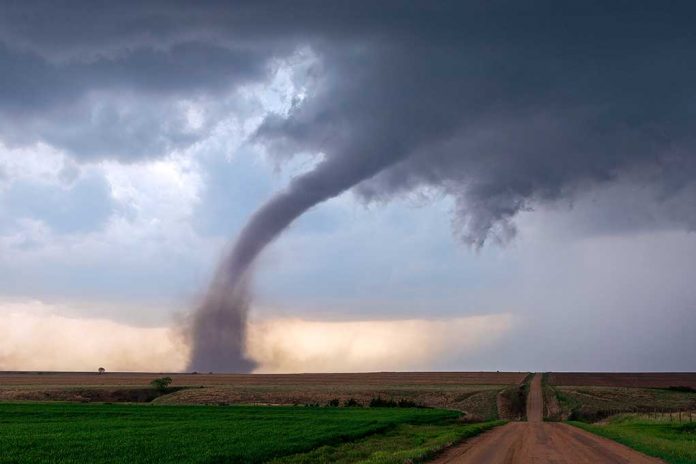 (USNewsMag.com) – There are few things more dreadful than a dark sky approaching and the sound of a tornado siren going off. April through June is the height of tornado season throughout the American midwest and south. Although spring is the height of the season, tornadoes can happen anytime the weather conditions are right. The big question is, are you ready? Here are some tips on how to be prepared before a tornado warning is issued.

To prepare, you have to know and understand the tornado or severe weather notifications. These may sound a bit tricky, initially. There are three to follow:

A weather warning should interrupt cable television and local radio stations. But because tornadoes can form within minutes, it’s important to be vigilant and look for the warning signs of an approaching storm.

Weather can change at the drop of a hat, especially in the spring. So knowing the signs of a tornado might be vital to safety and survival. Hail is often a precursor to a tornado. Look to the skies for rotating clouds that form a funnel shape.

If the cloud drops down and kicks up dirt and debris, it could be a tornado. Skies that are abnormally dark or may have a tint of green are also indicators a tornado is forming or on its way.

When that unmistakable roar of a tornado approaches (which is similar to a loud freight train), it’s time to take cover. The best place is a basement or underground storm shelter. The lowest part of your home, closet or bathtub can also suffice.

Stuck outdoors? Look for deep ditches away from flying objects. Avoid seeking shelter under a bridge or overpass. This is dangerous because the wind blows debris that could hit you.

Now is the time to arm your shelter location with a safety kit and necessities. They should include:

Adding extra living essentials such as snacks, pet supplies and medications is also a good idea. Make the area comfortable in case you have to stay there for a while. Be sure to tell family members that don’t live with you where this secure shelter is.

Tornadoes can range from a small F1 with minimal winds to a raging F5 with winds up to 300 mph, so it’s hard to tell upfront how much damage they might cause. Being prepared and aware are two of the best ways to make it out safely from a storm. While some storms are beautiful, there can be a dark side to them. Being armed with facts helps you and your family prepare accordingly.