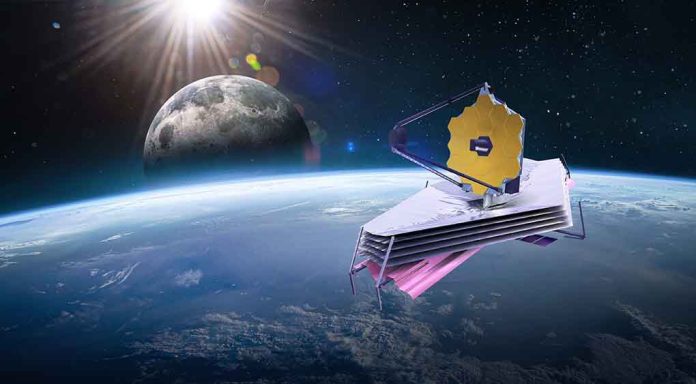 Revealed: These Are The Space Photos NASA Allowed For Release

(USNewsMag.com) – Many people enjoy stargazing at night, imagining what’s out there in the great beyond. There are so many questions about space that even when scientists answer one, a dozen more pop up in its place. This is the very reason why the Hubble and the Webb telescopes exist — to capture images we can’t see with the naked eye and maybe get a glimpse into what outer space has to offer. A recent display in Baltimore this past week has brought Webb’s capabilities into public view for the first time.

The Hubble telescope debuted 32 years ago, and at the time, it was the most advanced telescope available. It uses ultraviolet and optical wavelengths to create images of galaxies and space. It’s still in operation today, but it looks like Webb is giving it some serious competition.

On Monday, July 11, NASA released a sharp picture of the universe, taken by the Webb telescope, which launched on Christmas Day last year. With its infrared wavelength capability, the images it produces are far crisper, with more detail than its predecessor — and that makes sense considering the technology is not only different, but more advanced.

👀 Sneak a peek at the deepest & sharpest infrared image of the early universe ever taken — all in a day’s work for the Webb telescope. (Literally, capturing it took less than a day!) This is Webb’s first image released as we begin to #UnfoldTheUniverse: https://t.co/tlougFWg8B pic.twitter.com/Y7ebmQwT7j

The next day, the images of the Carina Nebula were made public — to much amazement. The images captured by these telescopes tell stories to help piece together what happened following the big bang, how it has evolved and how galaxies have formed in the billions of years since.

While people reveled at the images, it took six weeks for the highlight reel to happen. Several science communicators, press officers, and astronomers gathered for six weeks to choose pictures designed to wow — and they didn’t disappoint. Klaus Pontoppidan, who led the early release team, was the first to view the images and after staring at them for hours, was so disappointed he couldn’t share -them right away.

NASA calls the Webb telescope the Hubble’s successor, rather than its replacement, because the Hubble is still very much in operation. The Webb also varies in that it’s a stationary model, which sits at the Earth-Sun L2 Lagrange point. The Hubble, however, which was launched with a space shuttle, orbits Earth freely.

There’s a significant size difference between the two as well. Webb’s 6.5-meter mirror dwarfs Hubble’s 2.4 meters, giving a larger field of view. The unique capability of the Webb telescope is its larger, more advanced design, and its ability to see further back in time, possibly even identifying baby galaxies, some of the first created after the big bang.

The Hubble, as previously mentioned, has been in operation for 32 years. NASA expects it to last for several more years. The agency also expects to get at least 20 years out of the Webb telescope, and there’s no telling what it could discover in that time. For now, viewers and space aficionados can revel in the fact that this truly is a new frontier in space exploration.