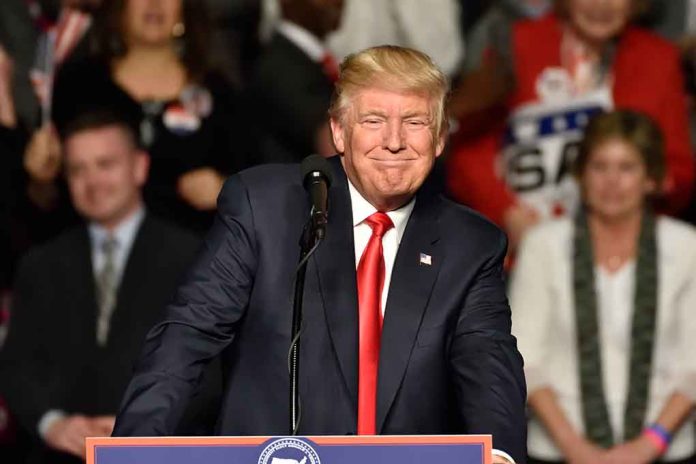 (USNewsMag.com) – Former President Donald Trump made a major announcement on Thursday that ultimately indicated where he believes society is headed shortly. He announced he would be selling non-fungible tokens (NFTs) in the shape of digital trading cards. Amusingly, his NFTs not only imitate baseball cards but also feature modified images of the former president.

Thank God, the digital trading cards are here. It was indeed a MAJOR ANNOUNCEMENT. pic.twitter.com/T1nsqRwr92

The reactions to this announcement were mixed; some straight-up mocked Trump for it. Many were not expecting an NFT collection to be Trump’s “major announcement.” Several pro-Trump conservatives expressed their thoughts on Twitter, saying that perhaps this was not a good time to share the good news of selling NFTs. Not to throw anyone under the bus, but when would have been an appropriate time for Trump to do whatever he pleases?

Then drops a low quality NFT collection video as the “announcement”, it just pushes people away…Damn.

Aside from that, despite all the criticism, Trump managed to sell out all NFTs within 12 hours of the announcement. All 45,000 of those cards earned him more than $4.45 million.

According to Coindesk, those that purchased a card or the collection will be automatically entered into a sweepstake to win one-on-one experiences with Trump. The experiences include a Zoom call, a cocktail at Mar-a-Lago, or a dinner in Miami.

Non-fungible tokens (NFTs) are similar to other cryptocurrencies such as Bitcoin, but they are different because they are “tokenized.” A Bitcoin is fungible, which means that it can easily be exchanged for something else similar or equal in value, but an NFT is unique and unlike any other. Typically representing real-world items such as artwork or real estate, NFTs are rare pieces and are originals that cannot be replaced.

Contrary to typical baseball cards, the “Donald Trump Digital Trading Card” collection will feature “much more exciting” art of Trump’s “life and career.” The cards are on sale for $99 each.

It is important to note that the sale of these cards is not affiliated with Trump’s 2024 campaign.