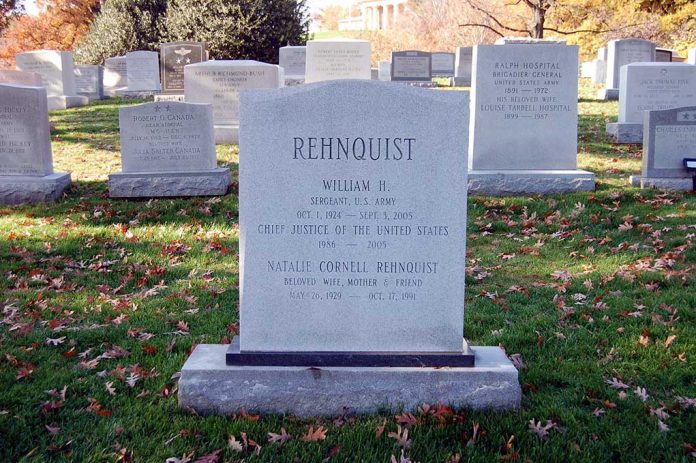 (USNewsMag.com) – William H. Rehnquist was born in Milwaukee, Wisconsin, on October 1, 1924 (appropriately, just five days before the First Monday in October — the day the Supreme Court of the United States (SCOTUS) begins each year’s session) to parents who were both Republicans. After serving in the United States Army Air Force during World War II, he returned to graduate at the top of his class and received his law degree (JD) from Stanford Law, launching a career of amazing proportions.

Rehnquist’s law school abilities won him a position as a clerk for then-Justice Robert Jackson during the 1951-52 SCOTUS term. After this, he spent the next decade and a half in private practice in Phoenix, Arizona, during which he made his first foray into the political arena.

Gaining a reputation as a staunch Conservative, he became the chief counsel for the failed presidential campaign of Republican Senator Barry Goldwater of Arizona in 1964. His work placed him on the GOP’s national radar, and he was appointed as an Associate Attorney General for two years under former-President Richard Nixon, who went on to nominate him as an Associate Justice in 1971. In 1986, Ronald Reagan elevated him to Chief Justice.

In the 1990s, the Cleveland, Ohio, Public Schools (CPS) were, to put it bluntly, a massive wreck. The state legislature enacted a “school voucher program,” allowing parents to use some of the tax monies paid into the system to pay tuition for their children at private or other public schools in the area. In his opinion, Rehnquist noted that 90% of ninth-graders failed basic proficiency exams and two-thirds of high school students failed to graduate.

Many of the private schools were religiously affiliated, and a group of taxpayers felt as if this use of taxpayer money violated the Establishment Clause of the First Amendment to the U.S. Constitution. Hence, they sued to prevent the use of vouchers by these schools. The court was split 5-4 along ideological lines. The Conservative Justices determined that since the law did not favor religious over secular schools or any one religion, the lawsuit was baseless and dismissed.

James Dale was an assistant scoutmaster in a New Jersey chapter of the organization and was a homosexual and gay rights activist. When his sexual orientation was revealed, BSA stripped him of his adult membership. He filed a lawsuit in state court claiming that the Scouts violated state law to prohibit discrimination on this class, but the first court granted summary judgment to the BSA because of their First Amendment rights of free association with the more authoritative law.

Dale appealed, and the appellate court sided with him, ruling the organization had to reinstate him to his former position. Attorneys for the Scouts asked the Supreme Court to hear the case, and they did, taking up the question of whether or not the closely held beliefs that this organization was trying to instill in their youngsters took precedent.

As with many cases of this nature, the Court rendered the decision 5-4 following each justice’s Conservative/Liberal beliefs. In this decision, Rehnquist wrote that returning Dale to his authoritative position over boys would severely hinder the BSA’s ability to teach the boys to respect the organization’s viewpoint regarding the morality of homosexual relationships.

First as an Associate and then as Chief Justice on the highest court in the land, William Rehnquist brought his Conservative values to the bench with him and used them as the lens through which he interpreted the law. He served until his death on September 3, 2005, when he was replaced as Chief Justice by John Roberts.