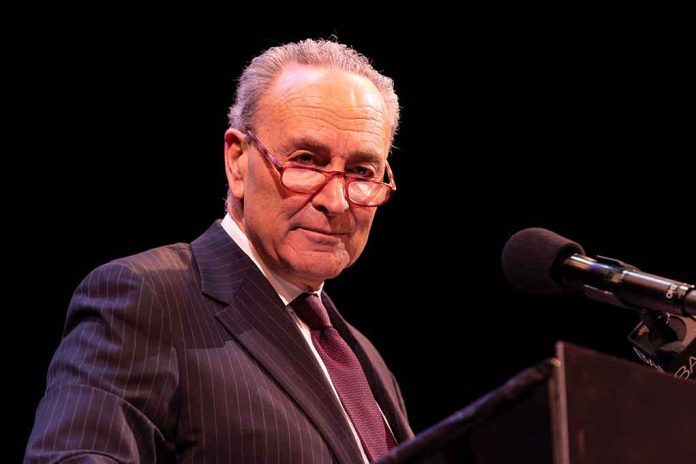 (USNewsMag.com) – Several Republicans in the Senate jumped on board with Democrats to deliver the most massive omnibus spending bill to date, despite opposition from a majority of Republicans that are actually fiscally conservative. The bill was more than 4,000 pages long, and most likely, most of those who voted in favor of it did not read it in its entirety.

The $1.7 trillion-dollar bill features several controversial issues that are sure to make Americans upset, aside from the fact that the expensive bill will worsen inflation even more in the coming months. Rep. Dan Bishop (R-NC) made an extensive thread on Twitter summarizing and detailing some of the terrible provisions inside the bill. The thread was so informative that even Elon Musk had to praise the representative for posting it.

The top provision Bishop highlighted is that Customs and Border Patrol funding may not be used for the department’s primary function – improving border security at the US-Mexico border. This is literally one of the reasons why CBP was created in the first place. The bill also prohibits funding from being used to finish constructing the border wall or additional border fencing.

In addition, the Department of Health and Human Services will receive $6.4 billion over three years to house, assist, and educate refugees and unaccompanied minors that arrive illegally.

Meanwhile, $410 million is allocated to improve border security in other random countries such as Egypt, Jordan, Lebanon, Tunisia, and Oman.

2. Millions of Dollars for “Bee-friendly” Highways, Salmon, and Population Control

Another $3 million worth of taxpayer money will be wasted ensuring highways are “pollinator-friendly” or “bee-friendly,” and $5 million will be wasted to research endangered salmon. If that doesn’t make your head blow, I’m sure $575 million being appropriated for “family planning/reproductive health” in areas where excess population growth “threatens biodiversity” will do it.

In other words, there will be taxpayer support for abortion and forms of eugenics because endangered species and plants come before humanity, and before the same people in charge of getting these politicians elected. How fitting.

3. Billions More for Ukraine and a “Ukrainian Independence Park”

Rep. Bishop mentioned that more than $45 billion will be appropriated for Ukraine, on top of the billions already approved and spent on the country (approximately $66 billion with little to no oversight). There was also approval for a “Ukrainian Independence Park” to be constructed in Washington, DC to “include information on the importance of the independence, freedom, and sovereignty of Ukraine and the solidarity between the people of Ukraine and the United States.”

Ukraine does not have such a solid history with money management and is actually ranked by Transparency International 32 out of 100 as a moderately corrupt country. It does not have a strong track record of expanding civil liberties and protecting democracy, and yet the Biden administration and Congress continue to approve blank checks to the country indefinitely.

As if $10 million in 2020 for “gender equity and equality” programs in Pakistan wasn’t enough, another $200 million was just approved in this same bill. This will be geared to “promote democracy and for gender programs in Pakistan.” Definitely a priority for Americans at a moment of record-setting inflation.

5. $3.6 Million for a Trail Named after Michelle Obama

Clearly the most important provision of all for Democrats is $3.6 million earmarked for the “Michelle Obama Trail – PATH Trail Project” in Georgia. It is a 3.8-mile trail near the Georgia State University – Perimeter College campus in Decatur that was initially approved to be renamed by the DeKalb County Board of Commissioners in 2016. This funding in the omnibus bill will be assigned under the Department of Transportation.

Most Republicans, including former President Donald Trump, have expressed disdain. Although Republicans put up a fight in the House to prevent it from passing, unfortunately, it ended up passing anyway, thanks to the Democrat majority.

The horrific Omnibus bill going through the Senate MUST be defeated. It will leave our border WIDE OPEN. It will cause inflation to spiral OUT OF CONTROL. It will make our communities LESS SAFE. This bill puts AMERICA LAST!pic.twitter.com/xJiX7nFb76

Talk about career politicians putting America Last. The American taxpayer is footing the bill – unwillingly. No wonder Americans continue to distrust the government. Their incompetence and dysfunction are on full display. I haven’t personally read the full 4,000+ pages of the bill (I doubt anyone has) but if I were in charge of this bill, the first page in, I would have thrown the whole thing out and started over with a much smaller, common-sense proposal.