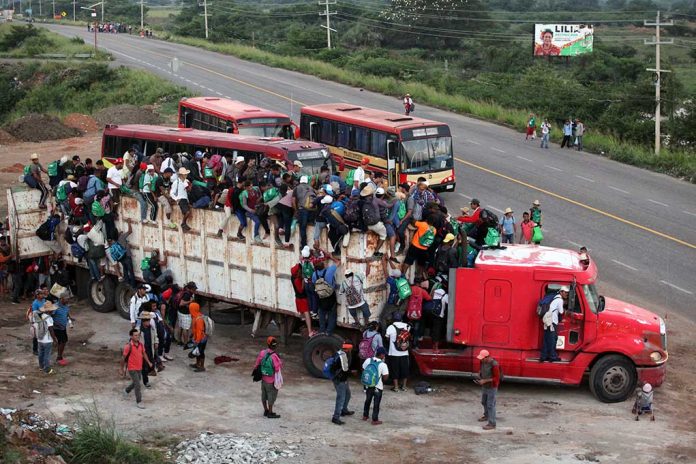 (USNewsMag.com) – Human smuggling continues to be a significant problem at the US-Mexico border. Oftentimes, criminals load migrants into the backs of tractor-trailers and bring them into America illegally — an act that has killed countless migrants over the years. Recently, a suspected trafficker is taking responsibility for doing just that.

According to a Department of Justice press release, Border Patrol agents stopped a big rig on April 15 at a checkpoint about 30 miles from Laredo, Texas. When agents asked the driver what he was hauling they said he lost the color in his face, sunk down into his seat, shrugged and said he didn’t know. Border Patrol unlocked the back of the trailer and found 145 migrants packed inside. They had traveled from El Salvador, Mexico, Ecuador, Honduras, and Guatemala and had no air conditioning or water. On June 28, the driver, 73-year-old Anthony Alfred Boring pleaded guilty to conspiracy to transport an undocumented alien.

Boring is now facing up to 20 years in federal prison and a $250,000 fine. His guilty plea came a day after the largest mass casualty event to ever occur on the border. Fifty-three migrants died after human smugglers put them in a tractor-trailer with no water or air conditioning. Law enforcement responded to a call and discovered the bodies after someone working nearby heard living victims screaming for help from a trailer in San Antonio. Four people have been charged in that case.