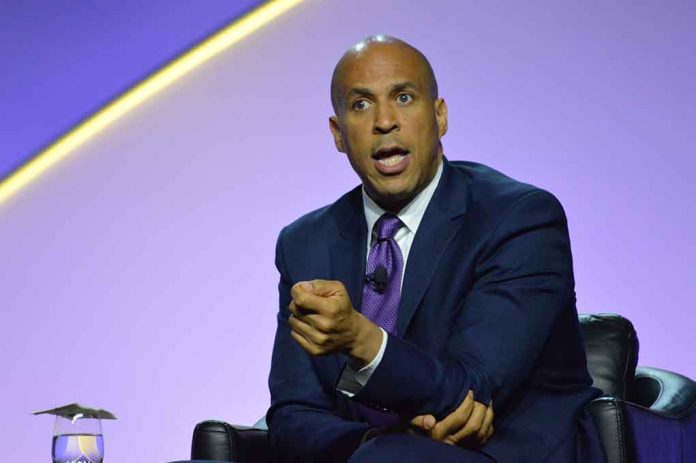 (USNewsMag.com) – On Wednesday, March 23, Supreme Court nominee Judge Ketanji Brown Jackson faced senators for the final day of questioning at her confirmation hearings. Toward the end of the day, Senator Cory Booker (D-NJ) had an opportunity to ask her questions. The senator got emotional while he was speaking to her.

Sen. @CoryBooker to Judge Jackson: "I'm not letting anybody in the Senate steal my joy…Don't worry, my sister. Don't worry. God has got you. How do I know that? Because you're here and I know what it's taken for you to sit in that seat." pic.twitter.com/m7cGjLrftZ

Booker talked about the historic nature of Jackson’s nomination to the court. If confirmed, and it looks like President Joe Biden has the votes to make it happen, she will become the first black woman to sit on the Supreme Court. The senator told her that when he looks at her, he “gets full of emotion.”

He told a story about being approached by an African-American woman while jogging and said his first thought was she just wanted to be close to him because he’s close to Jackson. The woman allegedly told him how important it was to her that the SCOTUS nominee was so close to joining the high court.

As Booker was speaking excitedly, Jackson seemed to wipe away tears. The senator said he was only the fourth black senator to be popularly elected. During the first week he was in office, the Democrat claimed one of the workers who cleans in Congress walked up to him and started crying because he was happy to see a black man in office.

The senator was extremely emotional during his speech, telling Jackson he sees his mom and his ancestors when he sees her.

There’s no doubt Jackson’s nomination to the court is historic. However, some argue Biden’s decision to only look at black female candidates was a disservice to the American people. What do you think?