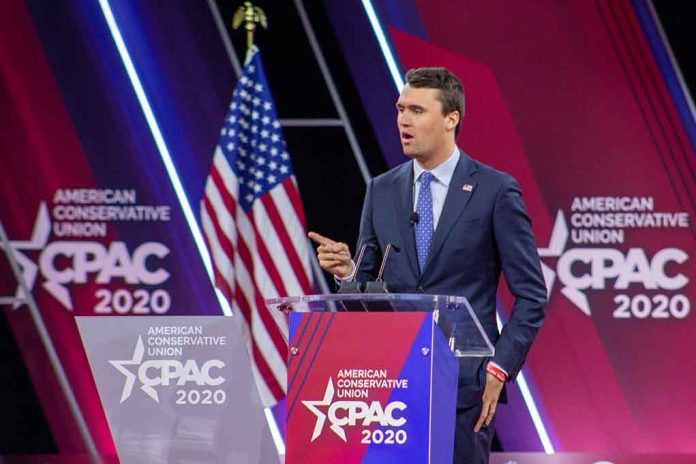 (USNewsMag.com) – After Republicans experienced huge losses in the midterm elections, fingers were immediately pointed at everyone – including Trump (who was not running for office at the time). Most of these fingers were being pointed by individuals such as Mitch McConnell and Ronna McDaniel, who has been the chair of the Republican National Committee (RNC) since 2017. McDaniel recently went after Charlie Kirk and Turning Point, the nation’s biggest conservative youth organization, accusing them of holding “great conferences” and not doing much more to get out the vote. The hilarious part is that the facts were truly not on her side, and she picked the wrong battle to have at the wrong time.

Ronna McDaniel recently went on the Brian Kilmeade show, claiming she was trying to look past rifts within the GOP and ready to unite the party. But her response to a round of questions by Kilmeade sounded far from it. She was asked what she thought about Turning Point’s recent AmericaFest conference, as well as the straw polling results indicating conference attendees would back a challenger to McDaniel for RNC chair.

McDaniel responded, “I’m just gonna say something about Turning Point. They do great conferences… How many young voters did they register? How many youth voters turned out this cycle? How about the college kids in Arizona where they are headquartered? If you’re gonna hold the RNC accountable, start looking at these outside organizations that don’t disclose their finances and ask them what they did. This is a group that’s taken over the youth vote, they’ve taken over college campuses, and they need to be held accountable.”

Ronna, thanks for asking.

We hosted well over 100 major door knocking events and rallies in target states and districts. (1/5) https://t.co/8ACHWgbQuw

TPAction gets involved directly with local/state elections, helps out with campaigns, and runs most of the grassroots-level activism needed to motivate voters, including getting individuals running as Precinct Committeemen. Among some of the other accomplishments, Kirk reported included recruiting over 2,000 precinct leaders, registering tens of thousands of new voters, expanding media outreach to Hispanic communities in South Florida, Phoenix, and Tucson, and all with $500,000 and a few million via TPAction’s fund.

Kirk went on the offense in the smoothest way possible, and even threw a dig at her recently disclosed controversial finances, saying “Instead of attacking us you should be sending us $700,000 in flowers thanking us.” The RNC was reported to have spent over $321,000 in flower arrangements since 2017, as well as more than $165,000 in “Home Improvement & Decor`,” and more than $500,000 in private jets. Sounds like a lot of donor money is being used for the right causes, am I right?!

Instead of attacking us you should be sending us $700,000 in flowers thanking us.

This would be McDaniel’s fourth term as chair if reelected. But conservative activists and critics have pointed out that major losses have been happening since she was first elected, and a feud has been brewing inside the GOP. Harmeet Dhillon, an RNC committee member, CEO of the Center for American Liberty, and co-chair of the Republican National Lawyers Association, won the straw poll conducted by Turning Point with 57% of the vote. McDaniel obtained just 1.7% of the vote. Dhillon announced her intent to run for the position on December 5th with the proclamation that “Republicans are tired of losing.”

Many conservatives in the grassroots movement feel disappointed in McDaniel. They feel as if her leadership has been ignoring many recommendations for years on how to further improve community outreach to convince Republicans or Republican-leaning voters to turn out the vote. She blamed everyone but herself, even though her organization is in charge of primarily promoting the Republican brand, the official party platform, fundraising, and assisting with election strategies.

She also doesn’t seem to recall when she referred to Charlie Kirk and Candace Owens as the future of the GOP at the 2019 CPAC conference. McDaniel said, “People like Candace Owens, like Charlie Kirk, we need more leaders like that.”

You’re right, Ronna, they are the future. Many of us are not just the ones that are going to be voting but may be running for office in the near future too. Many of us are helping get the messaging out or are playing a role in media outreach in whatever way we can. Alienating a group in charge of recruiting hundreds of thousands of voters or soon-to-be voters and getting future generations involved in conservative politics is probably not the smartest idea.

Turning Point has been making a name for itself for years under Kirk’s leadership, modernizing what is known as grassroots politics and making conservative politics cool again. The young Republicans are here to stay. I think it’s time for the RNC and the Grand Ol’ Party to start pointing fingers inward if they want to see real, winnable change come 2024. It’s like the saying goes: “Don’t bite the hand that feeds you.”