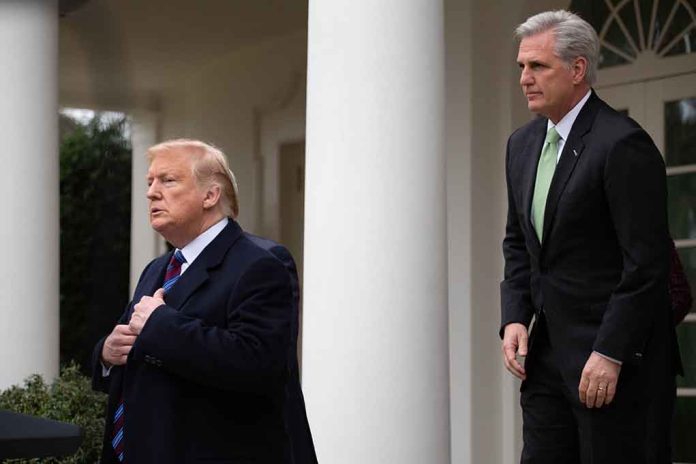 (USNewsMag.com) – A controversial House Republican Leadership call that took place in January 2021 recently resurfaced after it was leaked earlier this year, ahead of the 2022 midterm elections. As many Republicans point fingers and look for who’s to blame for surprising losses in competitive states, some argue that Kevin McCarthy (R-CA) may be part of the problem.

The resurfaced audio proves McCarthy and Liz Cheney (R-WY) were talking about former President Donald Trump behind his back, with Cheney asking McCarthy if he believed Trump would ever consider resigning after the infamous January 6 US Capitol Riot. As calls for impeachment grew, it appeared McCarthy was afraid of saying the wrong thing at the wrong time, and the audio proved that.

However, McCarthy did reveal that he would have recommended Trump resign, probably to help him avoid an uncomfortable impeachment process, similar to how Richard Nixon was able to avoid his.

Many critics of the establishment GOP argue this audio is proof enough of Kevin McCarthy’s disloyalty to the man that brought positive changes to the Republican Party from 2016 onward.

McCarthy’s announcement to run for Speaker has caused rifts within the party between more established politicians and newer “America First” candidates that also support Donald Trump. Among them include Rep. Andy Biggs (R-AZ), who is aligned with the Freedom Caucus and announced he would be running for the role in opposition to McCarthy.

I’m running for Speaker to break the establishment.

Kevin McCarthy was created by, elevated by, and maintained by the establishment.https://t.co/tKLPXUxSOA

Those uninspired by his Speakership believe McCarthy is not willing to stand on principle or deliver on promises, allowing Democrats to have an advantage over the mainstream narrative. Clearly, his broad “Commitment to America” is done purposely to prove that he has no true intention of resolving issues for the American people. His loyalty lies where the money and power rest.

It’s not every day that the far-Right agrees with Liz Cheney on something. Both sides view McCarthy as a man that only serves his own political purpose: