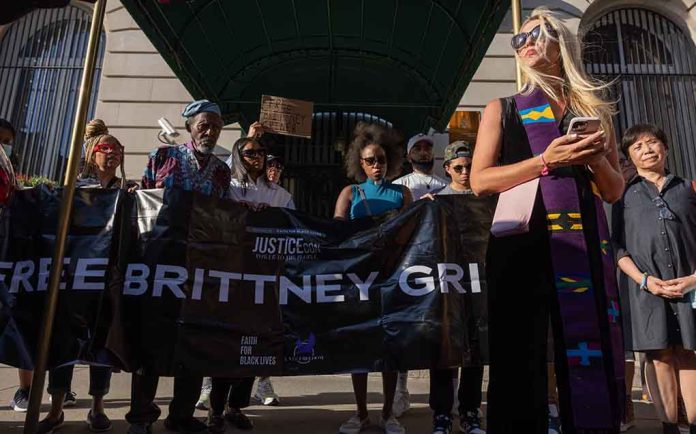 (USNewsMag.com) – The Russian government finally agreed to an exchange with the US government last week to ensure WNBA player Brittney Griner would be freed and allowed to come back to US soil. Griner has been imprisoned in the Russian country for the last 10 months. Her freedom came at a cost, however. The deal involved exchanging Griner with international arms dealer Viktor Bout, who was arrested in 2011 for engaging in terrorist-related activity.

Griner was arrested in February of this year on drug charges, specifically accused of attempting to smuggle illegal narcotics into the country. She was found carrying vape cartridges and hashish oil in her luggage at an airport near Moscow. While she consumed this for medical reasons with the authorization of a US doctor, the laws surrounding this sort of consumption are nowhere near as lenient in Russia.

There was a lot of pressure surrounding her wrongful detainment, but ultimately she was considered the perfect political hostage to pressure President Joe Biden to act as Russian officials pleased. There were clear geopolitical implications, especially as the US government continued to support Ukraine in the ongoing war against Russia.

We can’t ignore the fact that many on the Right considered her release untimely and unfair, considering that the US was exchanging a literal threat to not just the nation, but to the rest of the world, instead of someone less likely to continue committing terrorist crimes.

Benny Johnson, a well-known conservative political commentator, believed the trade was “evil” considering Bout was known as the “Merchant of Death” for a reason.

Brittney Griner is a pot-head wokster mediocre athlete that posed NO THREAT to anyone.

THEY ARE NOT THE SAME
This trade is evil pic.twitter.com/7RXQ2uL7Y9

Viktor Bout had collaborated with dangerous terrorist groups in charge of conducting deadly attacks in Libya. He was captured by the federal government during a 2008 sting operation in Bangkok, Thailand, where Bout believed he was about to meet with the infamous Colombian narco-terrorist group FARC to secure another deadly arms sale. He was convicted in 2011 for attempts to conspire to kill Americans and for providing material support to terrorists.

Others pointed out the fact that Paul Whelan, a former US Marine, is currently serving a 16-year prison sentence for allegedly spying on Russian officials and remains insistent that the case presented against him was fabricated for political reasons. The Biden administration did not fight to have him liberated in the same way as the WNBA player. Granted, the Russian government declined to allow a two-for-one exchange. But the fact remains that the Biden administration decided to engage in a one-sided negotiation that only benefited Russia and in many ways endangered American interests.

Former President Donald Trump called this exchange a “stupid and unpatriotic embarrassment for the USA” on Truth Social.

The priority should have been given to the man that sacrificed his life for this country, and not to the woman that kneels before the National Anthem, disrespects the American flag, and outright hates this country. The world is watching – and they see a vulnerable administration in the United States that is willing to offer weak bargaining chips to the benefit of our foreign adversaries.