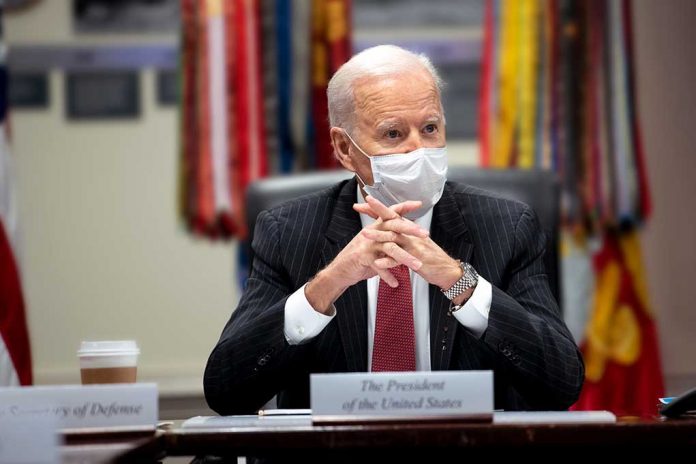 (USNewsMag.com) – The Democratic Party is currently trying to pass a massive $3.5-trillion spending bill. The legislation is described by many progressives as human infrastructure and is supposed to appease far-left lawmakers who weren’t happy with the smaller bipartisan bill. However, not everyone is on board and President Joe Biden is now trying to repair cracks in the party.

Biden meets with Democrats as $3.5T plan faces party split
Speaker of the House Nancy Pelosi, D-Calif., talks to reporters as she welcomes Australian Prime Minister Scott Morrison, at the Capitol in Washington, Wednesday, Sept. 22, 2021. The House has approved legislation to f… pic.twitter.com/SJIpbKTtjM

On Wednesday, September 22, Biden met with Democrats and Senator Bernie Sanders (I-VT) to try to work out a compromise between the moderate and progressive wings of the party. The legislation is a crucial part of his agenda, but it’s stalled as the two factions fight. Moderates, like Senator Joe Manchin (D-WV), believe the bill is too large. Far-left lawmakers, like Rep. Alexandria Ocasio-Cortez (D-NY), don’t think it’s large enough.

The meetings came ahead of Monday’s vote on the first part of the President’s infrastructure plan, the $1-trillion bill the Senate already approved. Progressives have said they won’t pass the smaller package if they don’t get what they want in a larger one. AOC recently slammed her moderate colleagues, calling them “destructive.”

Although Democratic leadership remains confident they will pass infrastructure legislation, the reality seems a lot shakier.