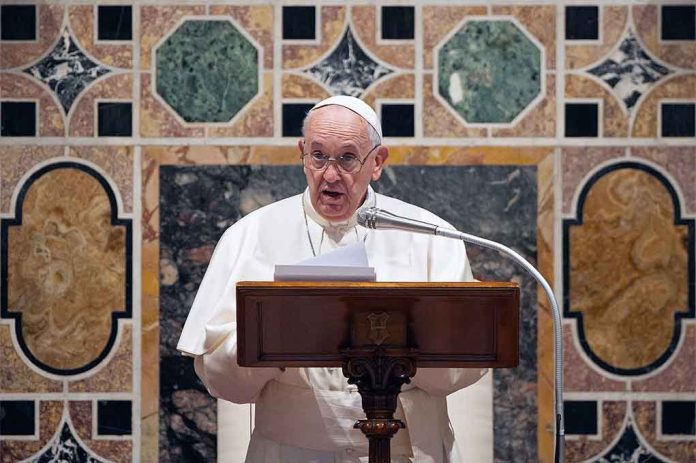 The Pope Just Made An Announcement NOBODY Was Prepared For

(USNewsMag.com) – Pope Francis is arguably the most progressive pontiff in generations. He has put women in positions of power, embraced everyone despite their lifestyles, and loosened the view on contraceptives. He’s also taken a firm position on climate change.

The pope wrote a message for the attendees of the Resilience of People and Ecosystems under Climate Stress concert on July 13. He called climate change an “emergency that no longer remains at the margins of society.” Instead, he explained he thinks the issue is front and center, reshaping both agricultural and industrial systems, as well as hurting families across the world. Poor people are especially impacted by the changes to the environment, which has created food insecurity and an inability to find water in some places.

Pope: “The phenomenon of climate change has become an emergency that no longer remains at the margins of society. Instead, it has assumed a central place…adversely affecting especially the poor and those living on the economic peripheries of our world.” https://t.co/0VrQ36QBOk pic.twitter.com/AAw2t1JyYG

The pontiff went on to say that people need to change their mentality and make a “commitment to work” for others and the “ecosystems in which they live.” To do that would show gratitude to God for the gift he gave everyone, according to Pope Francis.

Pope Francis said everyone should ask themselves what kind of planet they want to leave for those who come after them. What about you? Are you happy with the world we are leaving for those who will come after us, or do you agree with the pontiff that changes are necessary?