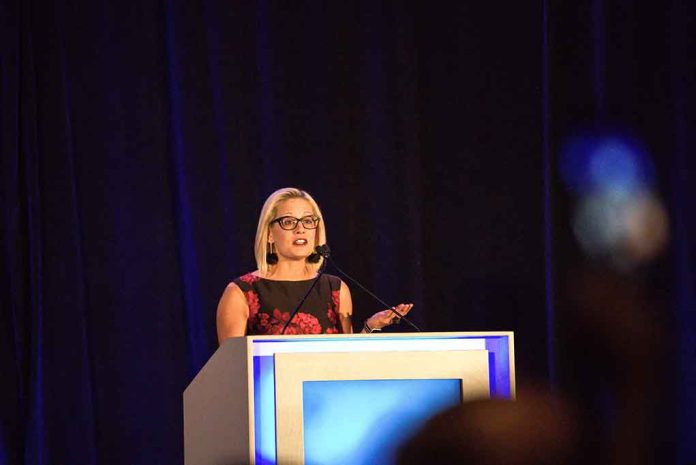 (USNewsMag.com) – Kyrsten Sinema’s official departure from the Democratic Party caused shock waves across the nation, especially among Democrats. Many were quick to criticize her for the move, including prominent Independent progressive voices such as Bernie Sanders. Ironically, some Republicans supported her, which led Rasmussen Reports to conduct a survey to gather people’s thoughts on the issue. The results are interesting, to say the least.

The Rasmussen Reports poll found that 60% of likely US voters approve of Sinema’s move, including declaring herself as an Independent. Thirty-nine percent strongly approve and 12% strongly disapprove.

Although Sinema’s favorability was divided with 38% viewing her either favorably or unfavorably and 24% remaining unsure, more Republicans than Democrats were willing to view her favorably. The second biggest group to shift their view was other independent voters.

Even more interesting was the fact that most of those surveyed agreed with the idea that the federal government, or the political apparatus in DC, was “broken.” Seventy-six percent of respondents agreed with this sentiment, and 49% strongly agreed with Republicans making up the majority.

Sinema previously stated that the partisan political system in Washington is “broken,” and that as an Independent she feels less partisan pressure to vote on legislation out of Capitol Hill. Meanwhile, her decision may cost the Democratic party another seat in the Senate, paving the way for the Republican Party come 2024. As an Independent, Sinema will likely still be voting for most progressive-leaning measures, but she will also be holding the Democrats accountable more often.

As of this year, only two in ten Americans trust the government to do what is right “just about always” (2%) compared to “most of the time” (19%), according to Pew Research.

Most Americans have been losing trust in the government since the Johnson administration in the ‘60s. There have been brief periods where it’s gone slightly higher, such as during the Reagan, Bush, and Bush Jr. administrations. Public trust in government has tanked since former President Obama was in office.

The party that controls the White House tends to dictate the fluctuating level of trust in government. Right now, that trust remains higher among Democrats than Republicans, mostly because a Democrat is in office at the moment (Joe Biden). The same happened with Republicans when Donald Trump was in office.

In the 1980s, it was more common for people to identify as either Democrat or Republican. However, more voters identify as Independent than ever before, reflecting a pattern noticed by Gallup since 2004. But just because someone identifies themselves as Independent does not mean that they are free from political biases.

Someone may identify as Independent for voting purposes, but can lean more Republican or Democrat, depending on the issues. These voters are usually fought for by both parties in the hopes that their increased willingness to not declare loyalty to either party may win them more votes when the parties need them the most. They are otherwise known as “swing voters”.

2022 was the year of the Independent voter. They determined the fate of the midterm elections and represented 30% of the electorate in this election cycle. They resoundingly rejected partisan extremism – from both sides. But the increase in independent affiliation means Republicans have gained an advantage. The Democrats have lost more than 4% of their electorate since 2020, no longer holding an edge. Republicans beat out Democrats with a 36% electorate in this cycle, yet they still lost the Senate.

If more Republicans came out to vote than Democrats, how did this happen? Republicans could have won independent voters’ hearts this year, but failed to capitalize. Maybe for the 2024 elections, they can take Sinema’s switch as a sign that independents are the new way forward, and that no vote is completely guaranteed.