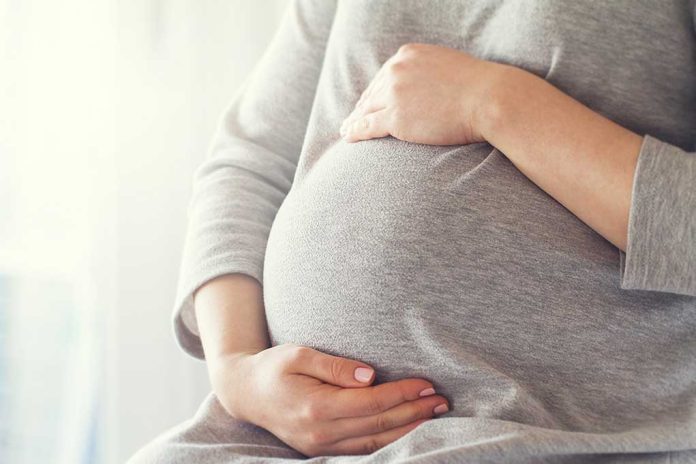 (USNewsMag.com) – Minnesota State Senate candidate Erin Maye Quade has been campaigning for office for months while pregnant. She was slated to speak at the Minnesota Democratic-Farmer-Labor Party Convention on April 23. For months, her campaign staff joked about the possibility of her giving birth on the day of the convention. It turns out, sometimes jokes have a way of becoming reality.

At 6:15 a.m. on Saturday, Maye Quade sent Mitchell Walstad, her campaign manager, a text to let him know she’d gone into labor at around 2 a.m., hours before her convention speech. However, a little bit of labor and contractions weren’t about to prevent the candidate from speaking. So, off they went to the convention hall.

According to the Washington Post, she spoke to the convention while experiencing significantly worse contractions than she was earlier in the day. A video of her speech showed her bending over in pain.

Today in Minnesota, @ErinMayeQuade gave a convention speech while in active labor. And her opponent didn’t think to ask to postpone the convention as she, you know, had to go to the hospital to deliver her baby. What the hell. pic.twitter.com/Wmu5fh40I6

Later, when the convention began voting and it was clear neither candidate was going to win the first round of balloting, Maye Quade allegedly met with her opponent, Justin Emmerich. She asked if he would support moving the vote to a primary because she had to go to the hospital. Emmerich refused. The first round of balloting went as Maye Quade predicted, with neither candidate receiving enough votes. Instead of sticking around to convince delegates to support her, she suspended her campaign and headed to the hospital.

Maye Quad welcomed a daughter, Harriet, into the world early Sunday morning. Emmerich went on to win the party’s endorsement unopposed during the second round of balloting. Maye Quad’s supporters argued had she been experiencing a heart attack, the convention would have been suspended. Walstad, her campaign manager, said he hopes the party becomes more respectful of everyone’s medical conditions before moving forward.