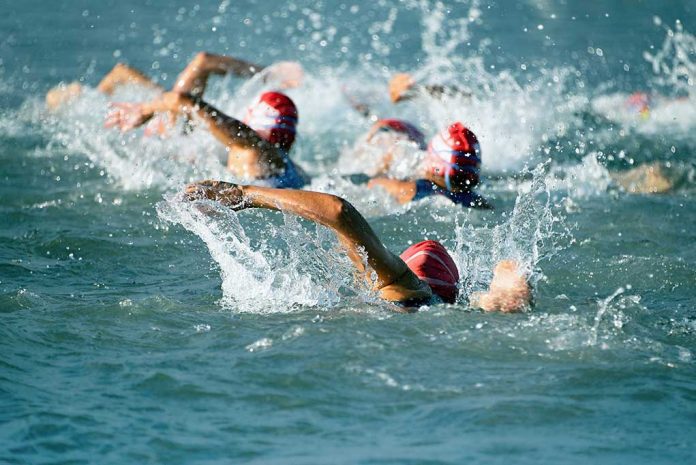 (USNewsMag.com) – The 2020 Tokyo Olympics have finally begun — a year later than scheduled. Over the weekend, athletes from around the world competed for the coveted gold medals. The games have faced some difficulties already from a potential Tropical Storm to an outbreak of COVID, but an incident on Sunday was especially weird.

On July 25, the men’s triathlon got off to a rough start after a bizarre boating incident. Fifty-six men stood on a platform on Tokyo Bay preparing for the first leg of the race when the starter told them to go. Half of the men dove into the water, but the others stood on the platform, blocked from starting by a camera boat. The boat tried to reverse quickly out of the way but it was too late. Suddenly, jet skis took off to stop the swimmers. They sent them back to the platform after officials declared an “invalid start.”

An absolutely WILD start to the men's triathlon.

A TV boat with twin outboard motors was sitting in the way as the starting gun was fired, then tried to reverse out as the athletes dove into the water.

It caused a race restart, but luckily no one was injured. pic.twitter.com/TKkPbaWNSK

About 10 minutes later, the race restarted. New Zealand’s Hayden Wilde went on to win the bronze medal but said he was “pretty gutted.” Norway’s Kristian Blummenfelt talked about the incident after winning the gold medal. He said he saw the boat while he was in the water and was “aware that [it] couldn’t be right.” Both Olympians said they looked on the bright side, they were able to get in a good warm-up before the race.