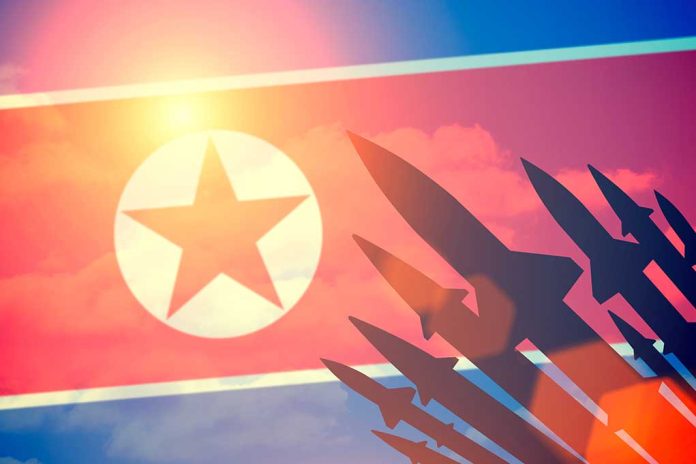 (USNewsMag.com) – North Korean Leader Kim Jong-un is known for his hot temper and belligerent attitude. He’s repeatedly threatened the US, its territories and its allies in recent years. Since President Joe Biden took office, it seems to have gotten worse and was demonstrated again recently.

On Monday, January 31, the Korean Central News Agency announced the country’s military had tested a Hwasong-12 intermediate-range ballistic missile it claimed was capable of reaching Japan and Guam, a US territory. The Sunday missile test is being described as the most significant launch in years.

North Korea’s Hwasong-12 is an intermediate-range ballistic missile with an estimated maximum range of 2,796 miles, more than enough distance to reach Guam, according to the Center for Strategic and International Studies. https://t.co/2Fs4ONwON1

According to North Korea, it launched the missile off the east coast at a high angle so it would not fly over other countries. There was no other information available about the launch.

The news comes after Kim indicated he was thinking about restarting the country’s nuclear program. He’d stopped it after meeting with former President Donald Trump.

The two men worked hard to form a relationship that could benefit both countries, but Biden refused to carry on Trump’s diplomacy. The 46th president has refused to give Kim international recognition. After one year of his policy, the relationship between the US and NK continues to deteriorate. Now it seems Guam is in danger – looks like Biden’s foreign policy plan toward NK may be another failure atop the list.