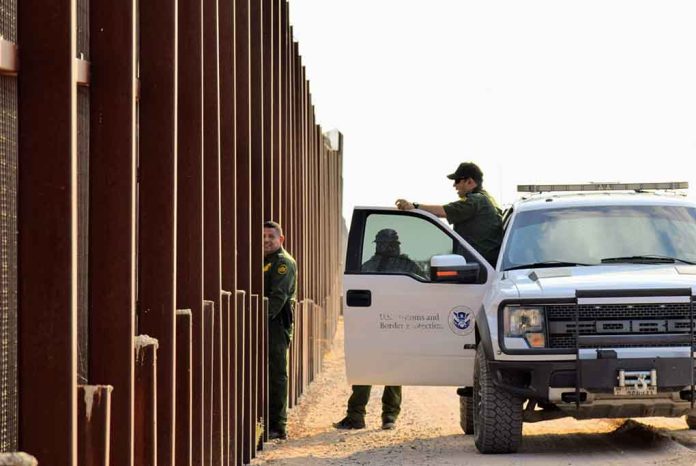 (USNewsMag.com) – Newly affiliated Independent Senator Kyrsten Sinema (AZ) admitted on “CNN’s State of the Union” on Sunday that the federal government has a lot of work to do when it comes to improving immigration policy, casting border crisis blame on both Democrats and Republicans. She said the government had “failed its duty” in not protecting communities on the southern border for the past four decades.

As accurate as that may be, however, the federal government is right now under Democratic control. The Biden administration is currently to blame for the worsening border crisis, breaking records previously set. Recently, more than 1,500 migrants were captured illegally crossing into the United States via the Rio Grande by El Paso, TX.

Sinema also revealed that she believes concerns from both sides can be addressed, such as giving “Dreamers” more rights and a pathway to citizenship, as well as increased border security.

This falls in line with what a majority of Americans believe, including self-described conservatives. A poll conducted by the National Immigration Forum in November found that 73 percent of those surveyed, including 70 percent of conservatives, support a bipartisan coalition on immigration reform, but believe that they need to work together now – not later. They support “immigration reforms that strengthen border security, allow immigrants brought to the United States as children to earn citizenship, and ensure a legal, reliable workforce for America’s farmers and ranchers.”

Another poll conducted by FWD.us and joint Democratic and Republican public research firms found that self-proclaimed independents also supported legislation that included both a pathway to citizenship for “Dreamers” and securing the southern border.

As much as many on both the left and the right may disagree with Sinema’s political viewpoints, we can’t deny she’s smart about how she’s tackling this issue. She’s rightfully appealing to all voices, which may prove key to passing significant legislation in an increasingly divided Congress.

Sinema recently proposed a legal immigration framework with Republican Thom Tillis (NC) that would provide a pathway to legal citizenship for over 2 million undocumented immigrants (Dreamers) with the promise of $25 billion in increased funding for Border Patrol agents and border security. The proposal also includes the extension of Title 42 while reforms of the processing system are worked out.

Illegal migrant apprehensions have surged to record highs of nearly 8,000 a day, but if Title 42 is lifted, DHS officials predict a worsened situation with an uptick of 10,000 migrants or more per day. The broken system, lack of resources and support, and an already overwhelmed enforcement agency is a recipe for disaster that has led to the heightened humanitarian crisis we are seeing at the southern border since the Biden administration took over the White House.