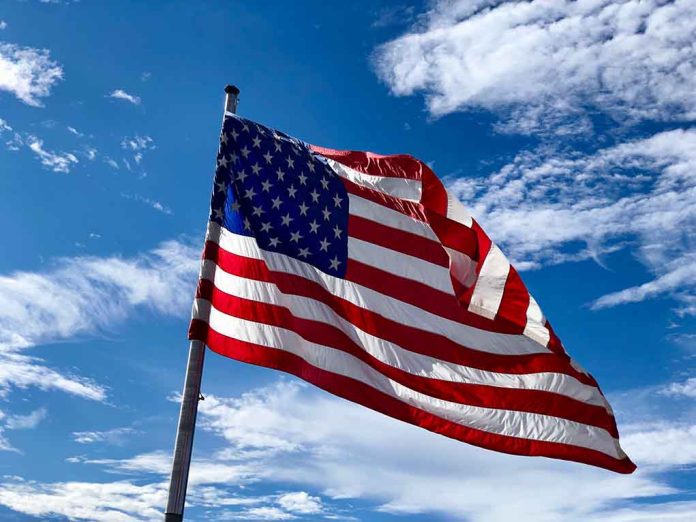 (USNewsMag.com) – Nearly every US government building at home and abroad has an American flag hanging out front. Currently, the federal government only has to ensure 50% of the flag contains American-made materials. A group of lawmakers wants to change that.

On June 15, Senator Sherrod Brown (D-OH) announced he and Senators Rick Scott (R-FL), Susan Collins (R-ME), and Joe Manchin (D-WV) introduced the All-American Flag Act. The legislation would require the federal government to purchase flags that are completely manufactured in the US. According to the statement, the US imported 10 million American flags in 2017 and all but 50,000 came from China. Brown and Collins introduced similar legislation previously but nothing came of it — now they have more support.

Senator Manchin issued a statement on Twitter pointing out that Americans pledge allegiance to, salute, honor, fight for, and celebrate the flag every day and he thinks the government should only purchase those made in the country.

Every day, students, Veterans, soldiers, scouts & Americans pledge allegiance to the 🇺🇸 Flag. We salute it; we fight for it; we honor & celebrate it. The federal government should ONLY purchase flags produced entirely on American soil w/ American materials https://t.co/sZgr85o0u4

Senator Collins issued a statement saying the “flag serves as a symbol” of America’s “identity, resolve, and values as one people.” All of the lawmakers agree that it only makes sense that only American flags actually made in the USA should hang from government flag poles and military bases.

Do you support the All-American Flag Act?