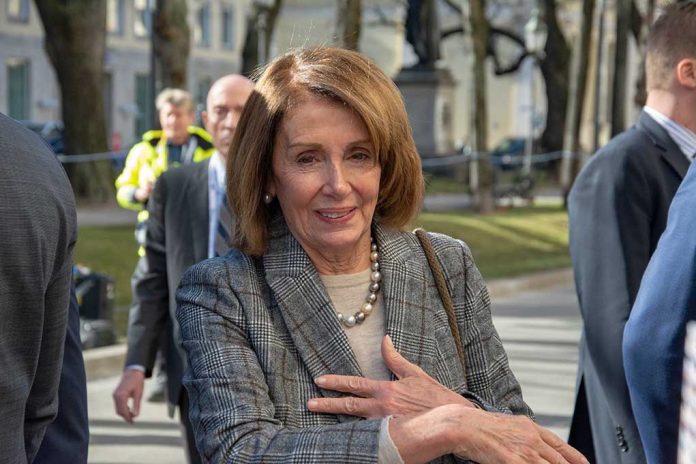 (USNewsMag.com) – Since the death of George Floyd at the hands of Minneapolis police officers in May 2020, the country has been in a seemingly constant state of disarray. Riots and violence plagued many US cities, particularly those run by Democratic leaders. Fast forward to the end of 2021, and the lawlessness hasn’t stopped. Rashes of smash-and-grab robberies have taken over California and Illinois, where leaders like Governor Gavin Newsom (D-CA) and Mayor Lori Lightfoot (D) look to place blame anywhere but where it rightly belongs — on themselves. Now, it seems like House Speaker Nancy Pelosi (D-CA) is taking a page out of their book.

Acknowledging the Problem, Not the Cause

On December 15, when asked about San Francisco Mayor London Breed’s (D) comments, Pelosi told reporters there’s “an attitude of lawlessness,” but has no idea where it comes from. During a press conference, Breed lamented the rising crime levels, saying it was time “to be more aggressive with law enforcement, more aggressive with the changes in our policies.”

She immediately faced backlash for her comments, which in today’s times are nothing short of tone-deaf, particularly when you take into account all the pushes from the Left to defund the police.

Over the last several months, cities like San Francisco and Chicago have been a hotbed of organized crime. Groups plan coordinated attacks on high-end stores, smash out the windows and loot as much as they can, turning around and selling the items for profit.

In November, one such incident yielded about $200,000 in stolen goods from a Nordstrom in San Francisco. A group of nearly 100 people raided the store and used two dozen cars to drive off with the merchandise.

One might ask the question: but, where are the police? When you consider efforts to defund the police, increasing violence toward law enforcement officers, and the vaccine mandates, which resulted in hoards of police officers walking away from their careers, it’s evident where the problem lies — with the Left. But you won’t see them taking responsibility.

In response to the increasing number of smash-and-grabs, Democratic lawmakers seem to be turning a blind eye to the problem, or simply ignoring the fact it exists. Last month, Alexandria Ocasio-Cortez (D-NY) said the media reports were false and there was no data to back up the claims. Mayor Bill de Blasio (D-NY) says New York City is much safer than it was nearly a decade ago. But, Chicago’s Mayor Lori Lightfoot really put the icing on the cake of these tone-deaf statements when she expressed disappointment in the retailers for not stepping up security in the wake of the robberies.

With so much denial and refusal to acknowledge the true source of the problem, it’s likely lawlessness will continue to persist. We can only hope lawmakers open their eyes and take action to nip crime in the bud.