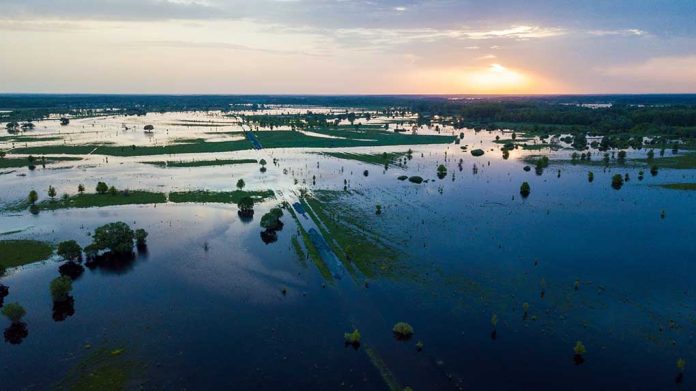 (USNewsMag.com) – Record rainfall fell across the south over the last week, washing out bridges and flooding neighborhoods. Tennessee residents are now left to pick up the pieces in the wake of a dangerous storm.

On Saturday, August 21, severe flooding left at least 22 dead and dozens missing. Humphreys County Sheriff Chris Davis told The Tennessean it was the worst flooding he’d seen in 28 years. More than 15 inches of rain fell across the area. In Hickman County, the Piney River measured 32 feet in the aftermath of the storm, breaking the record by nearly 12 feet.

The victims of the flooding include 7-month-old twins who were in their father’s arms when the rushing waters swept them away. Nathaniel Whitsett, a 16-year-old teen with autism, is also among the dead.

Tennessee Emergency Management Director Patrick Sheehan said teams are now focusing on recovering victims. Shelters have opened in the area to help those displaced by the storm. McEwen High School in Humphreys County is serving as a reunification center.

Tennessee wasn’t the only state hit hard. On August 18, Governor Roy Cooper (D-NC) declared a state of emergency for areas in the western part of his state after Tropical Storm Fred battered the state. At least five people died and one is missing.