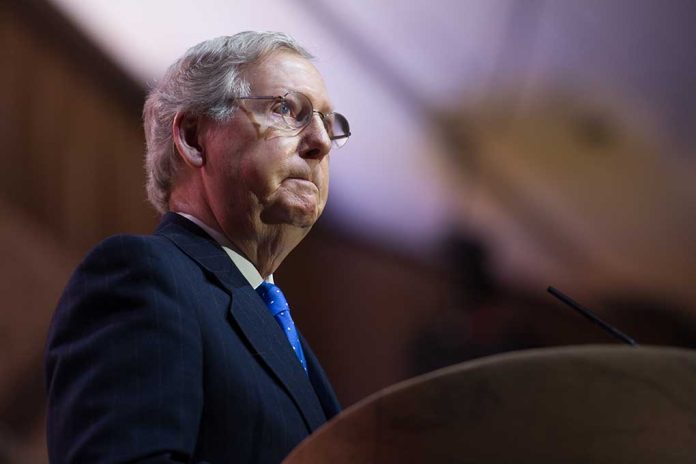 (USNewsMag.com) – The midterm elections were a nail-biter for a bit, but as the dust cleared and votes were counted, the GOP reclaimed the House of Representatives but failed to clinch the Senate. However, the party still had to elect the leader of the upper chamber. Mitch McConnell (R-KY) has held the position of Republican leader since 2006. This time, Rick Scott (R-FL) challenged him for the role.

On Wednesday, November 16, McConnell easily defeated Scott, who only announced his intention to challenge the longest-serving Senate leader the day before the election. In the face of this move, Senator Ted Cruz (R-TX) tried to delay the vote until after the Georgia runoff election on December 6. The motion failed to pass with a 32-16 vote.

Instead, the GOP voted on Wednesday as planned, and McConnell emerged victorious in a 37-10 vote, with one senator abstaining, despite former President Donald Trump backing Scott.

One of the key components of Scott’s bid for the Senate GOP leadership was his desire to speak to the Republican voters. In his statement to his party announcing his intentions, he said the “voters expect and deserve to know our plan to promote and advance conservative values.”

Scott was adamant that they had to stop pointing the finger at Democrats and actually show the voters what they plan to do about the issues the country is facing.

What’s Next for the GOP?

Following the election, McConnell was asked if he’d step aside; he replied in the negative, saying, “I’m not going anywhere,” according to Fox News. So, that begs the question, where does the Senate GOP go from here?

Many Republican senators, including Kevin Cramer (ND), spoke to McConnell’s leadership, saying he’s good at working with parties on both sides of the aisle, where healthy conversation needs to happen in order to pass critical legislation.

Others are tired of McConnell’s leadership and wanted to open the door to someone new. However, one of Rick Scott’s backers, Sen. Mike Braun (R-IN), said that Scott’s challenge may have helped the party move forward. According to Fox News, he also said Scott is “gonna probably make sure that 50 members … feel like we’re part of the process. And I think that’s healthy.” Even Senator Josh Hawley has hopes it will lead to continued change.

In addition to McConnell’s re-election, Sen. John Thune (R-SD) will hold his position as minority whip, and Sen. John Barrasso (R-WY) will return as conference chair.