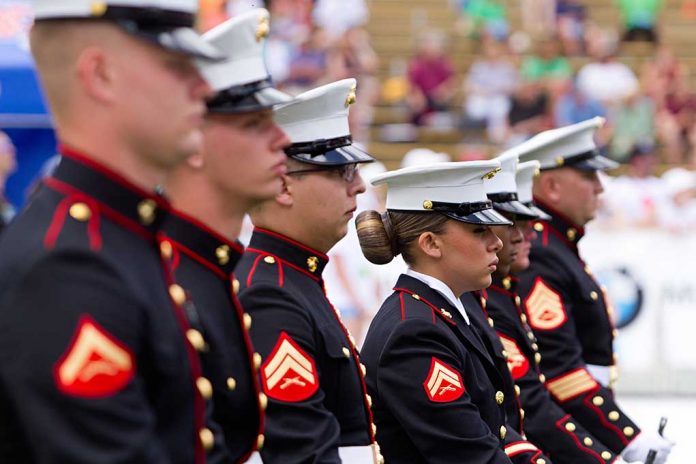 (USNewsMag.com) – Marine Lt. Col. Stuart Scheller made headlines recently when he slammed the military on its withdrawal from Afghanistan. Now, the military has jailed him.

Scheller’s family told Task & Purpose that his son was imprisoned for demanding accountability from up his command. Prior to his confinement, the lieutenant colonel released multiple videos blasting military leadership. He told his followers that his command told him to stop posting on social media, but he disobeyed the order. In his final video, the Marine acknowledged that he would probably end up in the brig for posting it. “Col Emmel please have the MPs waiting for me at 0800 on Monday. I’m ready for jail,” Scheller said.

Stu Scheller Sr. expressed anger over his son’s confinement, saying he was just asking for accountability and perhaps even an apology.

The Marine Corps Capt. Sam Stephenson acknowledged Scheller was in “pre-trial confinement” as he awaits a hearing. The Marine is being accused of violating the Uniform Code of Military Justice

When service members join the military, their free speech is limited. Although they don’t completely give up their rights, U.S. courts are generally hands-off. That’s because the military has its own code of conduct and court system. The federal government, including the courts, basically allows the Armed Forces to act with autonomy.

Many times it makes sense for the military to police itself. A civilian judge might not fully understand the ins and outs of the Armed Forces. However, there are some concerns about whether it’s fair for service members to be punished for speaking out, even when that means disobeying an order.