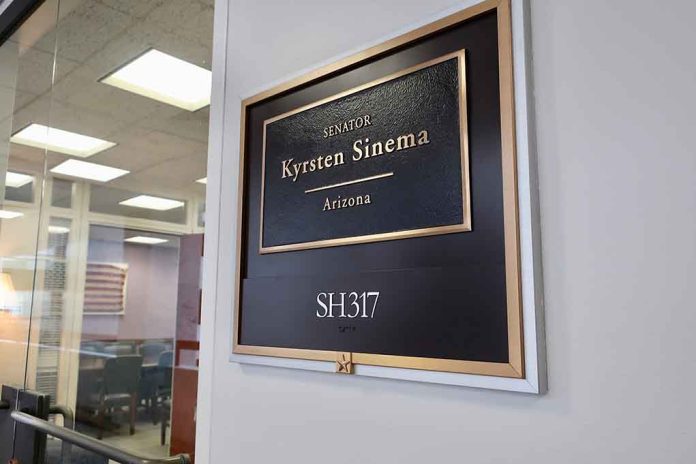 (USNewsMag.com) – In the most significant development to have occurred this past week, aside from Republicans losing a Senate seat in Georgia, Arizona Senator Kyrsten Sinema announced she is switching her party affiliation. She will no longer identify as a Democrat, even though she ran for the Dem ticket when she was first elected into office.

In a natural extension of my service since I was first elected to Congress, I have joined the growing numbers of Arizonans who reject party politics by declaring my independence from the broken partisan system in Washington and formally registering as an Arizona Independent. 1/3 pic.twitter.com/jUQHAeuxym

Sinema will now identify herself as an Independent, joining the ranks of Senators Bernie Sanders (I-VT) and Angus King (I-ME). The Arizona Senator notes that her core ideology remains the same, meaning she will side with legislation that supports expanding social issues, such as abortion and LGBTQ+ rights while remaining restrictive on more fiscal/economic issues.

Coincidentally, a party switch would cost Democrats bragging rights when it comes to retaining control of the Senate. But Sinema felt the need to do this not because she is in vital disagreement with members of the Democratic Party, but because she felt like it was “the right thing to do” for her own sake. She felt it would give her less pressure to focus on legislation far from the typical partisan points of contention.

The timing is just uncanny. Even though I don’t doubt Sinema will remain very progressive in her ideals, this does publicly recognize a retention issue, or at the very least an overall deterioration, of the Democratic party. It is yet another rejection of the extremism the party is embracing in its policies.

“In catering to the fringes, neither party has demonstrated much tolerance for diversity of thought,” she wrote in the Arizona Republic. “Bipartisan compromise is seen as a rarely acceptable last resort, rather than the best way to achieve lasting progress. Payback against the opposition party has replaced thoughtful legislating.”

Twitter’s new CEO, Elon Musk, commended Sinema and hoped more legislators would act “independently” in the “interests of the people.” Unfortunately, much legislation in recent years hasn’t focused on what American people truly need, but on what party members want.

Good for @SenatorSinema! I hope more of our elected leaders act independently, aka in the interests of the people.

Surprisingly, other Republican legislators, such as Lauren Boebert (who is considered to be more far-Right than many) congratulated her.

Hope many more see the light!

Earlier this year, another prominent voice in the Democratic Party and a former 2020 presidential candidate, Tulsi Gabbard, made waves by making a similar announcement. She accused the party of being “under the complete control of an elitist cabal of warmongers, driven by cowardly woke-ness.”

It is safe to say that the 2022 midterm elections were a sound rejection of extremism on both sides. Now, it is up to legislators to see how they conduct themselves after they are sworn in come January.