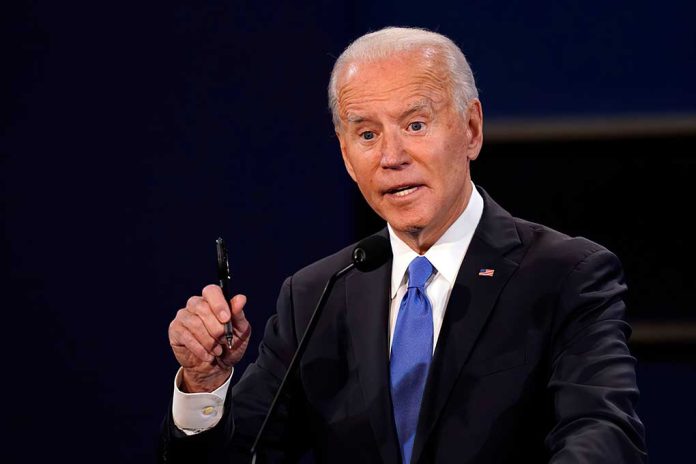 (USNewsMag.com) – Democratic Senator Kyrsten Sinema (AZ) is facing a tremendous amount of pressure from left-wing activists to vote in favor of Biden’s $3.5-trillion reconciliation bill. So far, the senator has refused because she believes the package is too large. Recently, activists have begun demanding answers from her in public spaces. Instead of condemning the intrusive acts, President Joe Biden has downplayed them.

On October 3, Simena was leaving a classroom on the Arizona State University (ASU) campus when a group of immigration activists confronted her. They told her they needed the Biden reconciliation bill passed. The senator responded, “Actually, I am heading out,” and walked into the bathroom. They followed her, telling her they knocked on doors to get her elected and demanded she support the bill. The senator ignored them and walked back into the classroom.

Sinema condemned the confrontation, saying the activists weren’t authorized to enter the building. She called the episode “inappropriate” and said her students were “unfairly and unlawfully” targeted.

President Biden, when asked about the harassment, said, “I don’t think they’re appropriate tactics but it happens to everybody.” He also responded to reports that Senator Joe Manchin (D-WV) was surrounded by people on kayaks while he was on a houseboat. The President said, “The only people it doesn’t happen to are people who have Secret Service standing around. So it’s part of the process.”

Generally, the process doesn’t involve following a senator into the bathroom or surrounding one’s houseboat, trapping them. If it does, maybe the process needs to be changed.