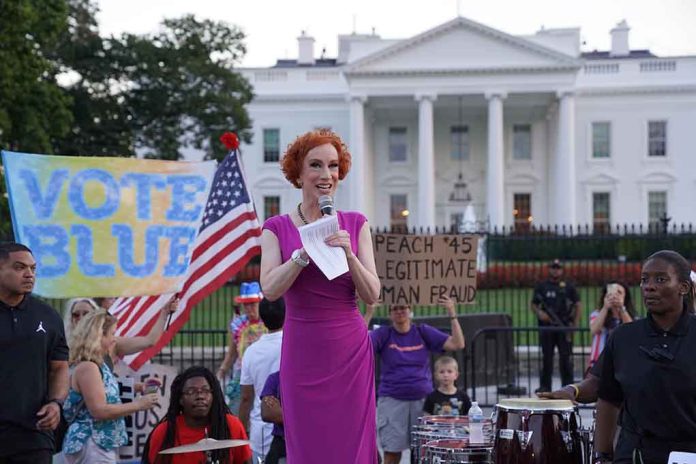 (USNewsMag.com) – In 2017, Kathy Griffin faced a tremendous amount of backlash and received a visit from the Secret Service when she shared a photo of herself holding the severed head of then-President Donald Trump. Five years later, the comedian is back in the spotlight, but some would argue that for all the wrong reasons.

On September 6, Griffin tweeted a warning telling her followers that voting for Republicans will lead to a civil war. Conservatives thought she was issuing a threat if the Left didn’t win the election. Senator Ted Cruz (R-TX) said she embodies the current Democratic Party with her violent rhetoric.

Retired Colonel Robert “Buzz” Patterson, who carried the nuclear football for former President Bill Clinton, pointed out Conservatives are heavily armed and have most of the military support. “I like our chances,” he said.

Griffin later clarified and said she doesn’t think Democrats will start a war. She accused former President Donald Trump’s supporters of constantly threatening civil war and mocked them for trying to accuse her now.

You guys. The maga blue checks are at it again. Because they are constantly threatening Civil War, they are now trying to suggest that I am the one who is threatening a Civil War. Because you know, that’s my thing. 🙄 https://t.co/bugd1SP1cr

According to the FBI, violent rhetoric has increased on social media platforms in recent months, including calls for civil war. A YouGov Poll found nearly 40% of Americans think such a battle could take place in the next decade. Republicans were more likely to think it would happen, but the survey did not say they would be the ones to start it.

Do you think America is headed toward civil war or is this just more hype by the mainstream media and the Left?