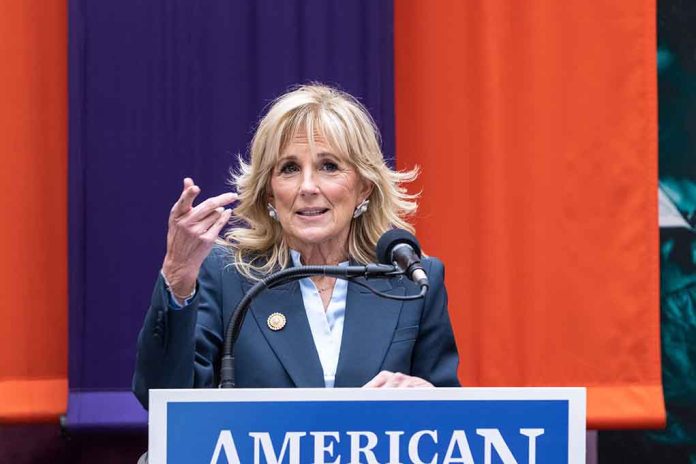 (USNewsMag.com) – On July 6, former First Lady Nancy Reagan would have turned 101 years old. Unfortunately, she passed away on March 6, 2016, at the age of 94. The US Postal Service (USPS) and the White House are now honoring her life, with First Lady Jill Biden offering a special tribute to the former Republican First Lady.

Jill Biden held an event at the White House on Monday to help unveil a new postage stamp in Reagan’s honor. During a speech, the FLOTUS said former President Ronald Reagan’s wife “served the American people with grace.” Even though Mrs. Reagan was thrust into the spotlight when her ambitious husband won the presidency, she “found the humanity in it all.”

Throughout Reagan’s time as FLOTUS, she took on a number of causes. She brought attention to the national drug epidemic, getting involved in D.A.R.E. and coining the catchphrase, “Just say no!” She also tirelessly raised awareness for breast cancer screenings after she underwent a mastectomy. President Reagan preceded his wife in death by many years, passing away from Alzheimer’s complications in 2004. His diagnosis propelled Mrs. Reagan into action to raise money for research into the disease.

Biden told the attendees at the White House event that the former FLOTUS’ life is a demonstration of how people can change the world with big and small acts. The stamp celebrates all of FLOTUS Reagan’s accomplishments.