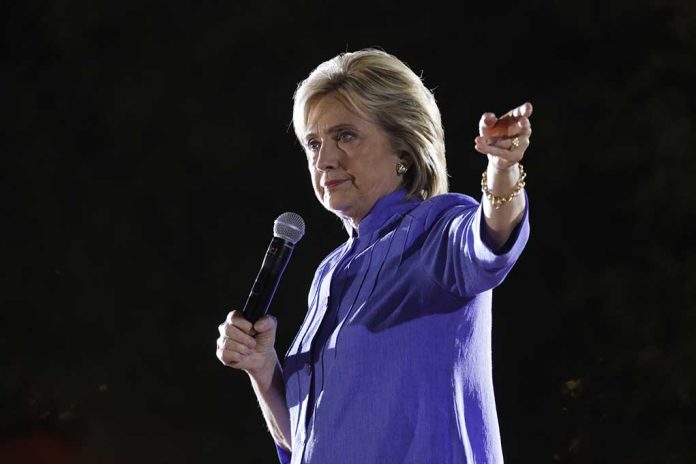 (USNewsMag.com) – On Saturday, February 12, Special Counsel John Durham exposed Hillary Clinton in court filings. He revealed her 2016 campaign paid money to a tech firm that “infiltrated” the servers at Trump Tower and later at the White House in order to gather information. Despite her obvious connections to alleged illegal activity, Hillary refuses to talk about it.

Hillary was in New York City on Tuesday when a Daily Mail reporter confronted her about Durham’s allegations. “Did you pay to spy on the Trump campaign?” the journalist asked the former secretary of state. They followed up, asking when she planned to comment on the accusations. Instead of answering the questions, Hillary just waved at the reporters and continued walking.

BREAKING: Hillary Clinton ignores questions from a Daily Mail reporter about revelations from Durham that her 2016 campaign paid for illegal spying on Donald Trump. pic.twitter.com/q351KxGO43

It’s not just Hillary who’s refusing to answer questions about the Durham allegations. During a White House Daily Briefing, Jacqui Heinrich, a journalist for Fox News, asked Deputy Press Secretary Karine Jean-Pierre if the president believes presidential candidates using computer experts to hack into the computers of other candidates is considering spying. The WH official refused to answer and instead told her to ask the DOJ. The reporter tried to ask twice more but was told to speak to the DOJ each time.

Do you think Hillary and President Joe Biden’s White House refusing to answer the questions makes them look more suspicious?