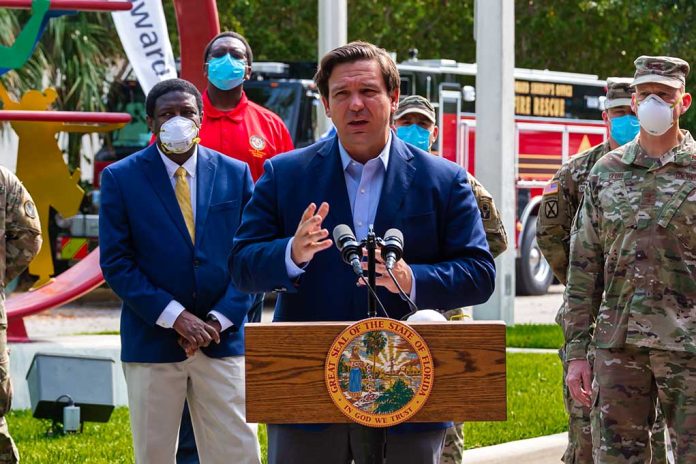 DeSantis Fires Back After Reporter Tries To Politicize Hurricane Response

(USNewsMag.com) – A liberal reporter tried to score political points off Florida’s popular Republican governor on Tuesday, but got firmly slapped down. Governor Ron DeSantis (R) was briefing journalists when the challenge came out of left field. However, he quickly responded and left no doubt who was in charge of the situation.

It's moments like these that expose the media for what they really are! https://t.co/ydFyTKyjSz

As Hurricane Ian approached the US coast on September 27, Governor DeSantis set out to brief the media on the state’s preparedness. However, he was ambushed by a journalist who tried to trip him up by misrepresenting a quote from FEMA Administrator Deanne Criswell. The reporter alleged that “Criswell said today she acknowledged concerns that … Florida’s, as we’ve said, lax response to the storm so far.” Before he could get any further, DeSantis cut him off and set him straight.

Telling the reporter he was talking “nonsense” and adding, “stop politicizing, okay?” DeSantis pointed out Florida had declared a state of emergency as soon as the developing storm became a potential threat — before it was even fully formed. He explained state and county officials had done a lot of hard work to prepare for the hurricane, and confirmed Florida has “a good relationship with FEMA.”

DeSantis also made clear he’s ready to talk to President Biden, however Biden had dodged media questions about why he hadn’t called the governor as the storm approached.