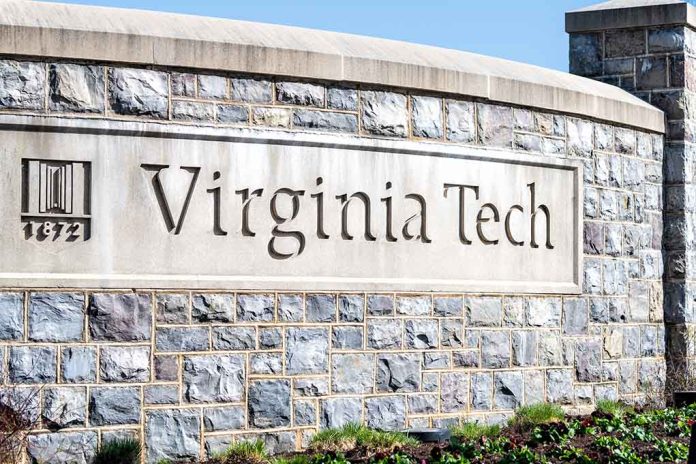 (USNewsMag.com) – In September 2020, Virginia Tech junior Kiersten Hening refused to join her soccer teammates in taking a knee during the national anthem as part of the team’s “unity statement” of support for the Black Lives Matter movement. Though Hening has said that she does support social justice and believes that Black lives matter, she did not want to keep BLM as an organization because of their stated mission to eliminate the nuclear family. She did not want to kneel during the national anthem.

Despite having played in all 41 matches of the 2018 and 2019 soccer seasons, starting in all but four games and having the most minutes played on the roster at the beginning of the 2020 season, after she refused to participate in taking a knee as suggested by her coach, Kiersten was benched. A federal lawsuit against coach Charles “Chugger” Adair, filed by Hening in 2021, claimed that she was subjected to “a campaign of abuse,” which eventually led to her quitting the team, and alleged that Adair had violated her First Amendment rights. Hening was seeking to be granted damages, reinstated to the team, and that Adair takes First Amendment training.

In December of 2022, a Federal Judge allowed the lawsuit to proceed to trial despite Adair’s claims that he had not retaliated against other players who refused to take a knee. Therefore, Hening’s allegations were unfounded. Less than a month later, Kiersten agreed to accept a $100,000 settlement. The terms of the settlement did not require that the school or the coach admit any wrongdoing.

Adair quickly took to Twitter, claiming that the case lacked standing or evidence and that “the truth” had prevailed. Hening’s lawyer, Adam Mortara, replied to the tweet several hours later and pointed out that his client was receiving a six-figure settlement, a factor Adair had conveniently omitted from his statement.