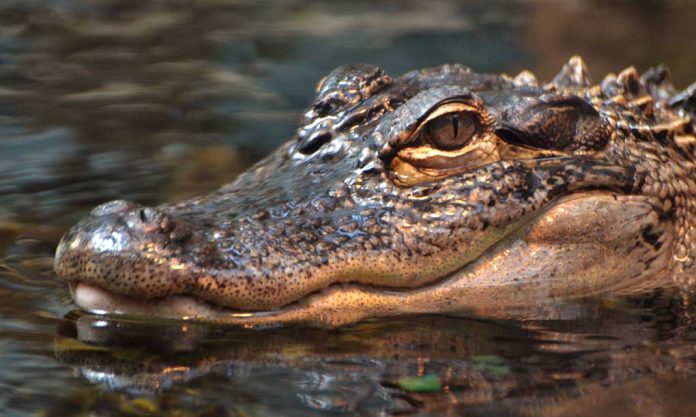 Later, Alligator: Drivers Snap The Photo Of a LIFETIME On Florida Interstate

(USNewsMag.com) – Florida residents know there is one thing that outnumbers the snowbirds who descend on the state each winter: alligators. These reptiles are found in nearly every fresh body of water, and running across one is normal. Generally, they’re not found riding on cars, though.

Over Labor Day weekend, Karen Kress was driving along I-95 in Brevard County when she spotted a gator. The creature wasn’t walking across the road or chillin’ in a pond — it was strapped to the back of a Chevy SUV.

Someone in the car snapped a photo of the sight, and Kress published it on social media. She captioned her picture, “Spotted on I-95 yesterday. I’m accepting suggested captions….obviously, this is in floriduh [sic].”

It is currently alligator hunting season in Florida, which began on August 15 and ends on November 1.

But in order to hunt a gator, you must have a permit through @MyFWC. pic.twitter.com/QjTEGmtjJn

The alligator was massive. His body was the width of the SUV and would definitely be longer with its tail stretched out. The gator appeared to be dead, and some pointed out that it looked like there was a tag on its body for hunting season, which runs from August 15 through November 1.

Kress told the Miami Herald she was in “disbelief” when she saw the reptile strapped to the SUV. She explained that after living in the state for three decades, she never “tire[s] of seeing an alligator,” but this is the first time she has seen one “on the interstate.”