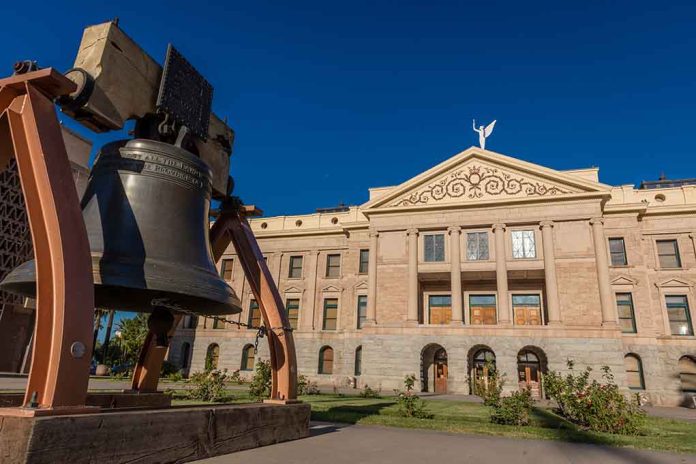 (USNewsMag.com) – Sitting Arizona Republican Governor Doug Ducey is expected to exit in January and formally swear-in Democrat Governor-elect Katie Hobbs. Rumors are already circulating around GOP circles that Ducey may have a solid chance of representing the Grand Canyon State as a US senator.

Ducey has been governor of the state since 2015. Arizona is one of 28 states that has 2 consecutive term limits for the office of governor, which means Ducey is not allowed to run for reelection a third consecutive time. However, the lack of lifetime term limits means that Ducey can run for another elected position, and possibly attempt to run for governor again after four years.

Ducey declined a run for the 2020 Senate and recently reiterated that sentiment. But some Republican leaders are hoping to convince him to run against incumbent Democratic Senator Kirsten Sinema

Among those already backing a potential Ducey run include Sen. John Cornyn (R-TX) and Sen. Mitt Romney (R-UT), according to Business Insider.

Republicans underwent shocking and serious losses in the midterm elections, especially in the state of Arizona where Blake Masters ran against incumbent Senator Mark Kelly (D-AZ). Many are hoping to quickly move on and capitalize on existing strong leaders with reputable and proven track records. They mostly agree Ducey may be the winning formula needed to retake the Senate in 2024.

Although nothing is certain, it appears that Sinema’s recent switch in party affiliation may ultimately affect her chances of seeking re-election. It remains to be seen if the Democratic Party will be willing to support her campaign after she called it quits, indirectly criticizing them while announcing her switch to Independent.

Ducey appears to be a strong candidate. He’s not an “election denier,” he can’t be accused of right-wing extremism, he has implemented solid school choice policies, and he has a strong record of managing the economy and promoting economic growth during and after the pandemic (growing the GDP by more than 50%). He’s pushed back against the Biden administration on immigration issues, even using shipping containers to create temporary border barriers in response to rising levels of illegal crossovers.

The only problem he may face is winning over the hearts and minds of more MAGA and America-First Republicans, especially since Donald Trump does not support him anymore. Many are also upset that more establishment leaders are backing him after Ducey himself failed to rally support behind Kari Lake sufficiently.