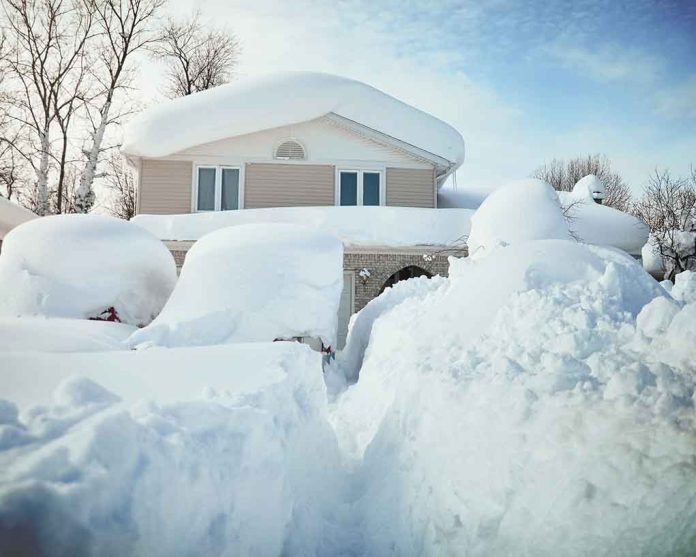 (USNewsMag.com) – Storm Elliot brought lots of snow and subnormal temperatures to a vast swath of the United States in the days before Christmas. One of the hardest hit areas was Buffalo, New York. Buffalo frequently sees Lake Effect Snow, a phenomenon that occurs when cold air passes over the warm water of the Great Lakes, and which brings very high snow totals in a short amount of time.

The residents of Buffalo suffered through paralyzing snow totals and power outages, both scenarios which experts had warned were likely. However, days after the storm, only a third of the streets had been cleared. To maintain public safety, a driving ban was issued for the entire city. On Tuesday, December 27th, the state brought in Military Police to help enforce the ban. The city also announced a special police unit assigned to prevent looting as well as to catch looters after videos of one looting incident went viral online.

As the death toll continues to climb, the Erie County Executive unleashed his frustration with the Mayor of Buffalo. Mark Poloncarz criticized Mayor Byron Brown and called his response to the storm “embarrassing.” He also said that he was speaking with state officials and they were considering taking over the snow removal duties currently under Mayor Brown’s control. Despite Buffalo being prone to major snow events, this is not a new phenomenon. Brown has been the Mayor of Buffalo since 2006, and as Poloncarz put it, the city has failed to clear the streets quickly “storm after storm after storm after storm.”

Meanwhile, crews continued to restore power to the town, an urgent task necessary to reduce the risk of more deaths. People often turn to dangerous heating methods when they get desperate. As one resident noted, his family had been using a gas oven to produce heat after suffering through days of no electricity and frigid temperatures.

More help is on the way for Buffalo. President Biden approved a state of emergency, and New Jersey has sent crews to assist their neighbor.