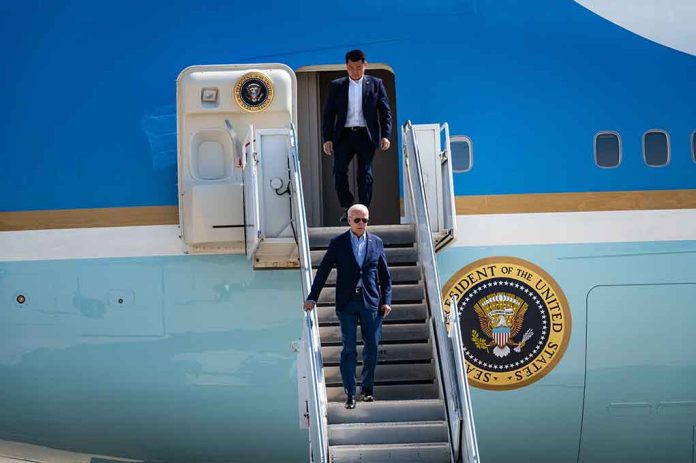 (USNewsMag.com) – President Joe Biden visited the state of Arizona on Tuesday to give remarks about jobs, recovery, and manufacturing achievements in his administration and to promote a $40 billion investment in a Taiwanese chip manufacturing plant in the state. Critics were quick to question why the president decided to visit a state undergoing one of the worst immigration crises in recent history without actually visiting the US-Mexico border.

Known as a “tool-in” ceremony, Biden’s visit to the Taiwan Semiconductor Manufacturing Co Ltd’s factory in Phoenix included the company of several “Big Tech” CEOs, such as Apple Inc Chief Executive Tim Cook, among others.

The investment by a foreign company could potentially create thousands of jobs within the state while also possibly improving the supply chain that has been fragile since the COVID-19 pandemic hit. Chips for vehicles and other technological items have been in short supply in the US, giving China and other foreign countries the upper hand. Not only has this made items more expensive for consumers, but it has also threatened America’s national security by leaving it at the mercy of a rival country.

However, Biden’s visit to an incredibly important border state, while excluding visiting the border, undermines an issue that remains one of the most important concerns for many voters across the country.

A Rasmussen Reports survey recently conducted with immigration hawk and reform group NumbersUSA revealed that 58% of midterm election voters believe the government is doing a poor job at reducing illegal immigration and border crossings. The majority of those surveyed, 60%, believe the border crisis is a serious issue, and a majority of the same midterm election voters actually blamed the current president for worsening the situation. Another 67% supported building a wall or other barriers, with a surprising 49% of Democrats agreeing with that sentiment.

The same survey showed midterm voters from the state of Arizona give the Biden administration a “poor” rating on immigration.

When Fox News’ White House correspondent Peter Doocy asked the President why he wouldn’t be visiting the border, Biden replied, “Because there are more important things going on. They’re going to invest billions of dollars in a new enterprise.”

It seems that Biden has no pressuring reason to change his current course and to truly listen to the American public’s more immediate concerns. This is even more notable after surprisingly retaining the Senate and winning several key governorships nationwide, despite having underwater approval ratings and a high inflation rate.

The threat of fentanyl pouring through American communities continues to be a major issue as cartels take advantage of a porous border and smuggle not only drugs but also individuals that are not being properly vetted by federal authorities. In fiscal year 2022 alone, close to 100 individuals on the US Terrorist Watchlist had been intercepted, and hundreds of thousands of illegal migrants, or “gotaways”, were able to escape being caught by Border Patrol agents.