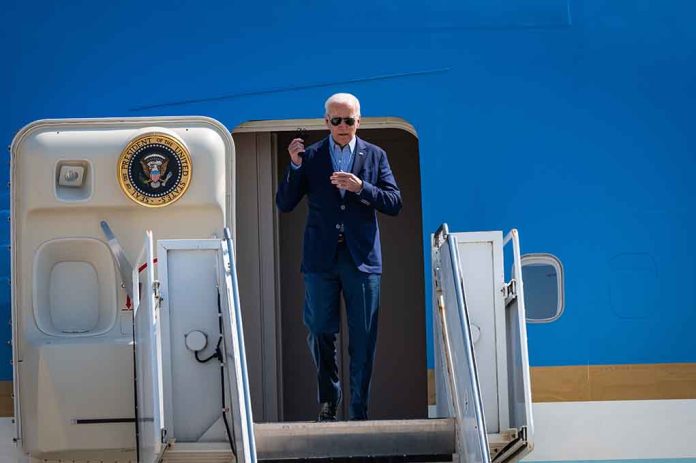 (USNewsMag.com) – President Joe Biden has spent a lot of time away from the White House. While his press secretary assures the public that the presidency is a job that can be done “from anywhere in the world,” the amount of time Biden has spent vacationing or working remotely is a whopping 38.6% of his first full calendar year in office. Most of his time away from Washington has been spent at his Delaware property. In order to keep the President secure while he spends time in The First State, nearly $500,000 of taxpayer dollars has been allotted to build a barrier wall. That project is not projected to be completed until the June of 2023.

The amount of time Biden has spent in Delaware had already outpaced the much-criticized former President Donald Trump’s trips away from Washington by October of 2022. In fact, even CNN has reported that were Joe to be re-elected, his total vacation time would outweigh many previous presidents, including Obama, Regan, and Bush. While the White House and mainstream media have repeatedly reminded people that he is not simply on vacation and that Joe is working from home, they also argue that he is spending time with his family. According to White House press secretary Karine Jean-Pierre, spending time with his family is a “right” he has “just like every other American across the country.” This assertion is interesting, considering Biden is the first modern president not to have any school-aged children in several decades.

When the President does vacations, he has a habit of accepting free stays at luxury properties owned by the ultra-rich. In South Carolina, he stayed at Maria Allwin’s mansion. She is a Democratic Donor. In Nantucket, David Rubenstein lent the Bidens his $20 million property, and in the family’s most recent trip away, they stayed in St. Croix at the villa of Bill and Connie Neville. They, too, are wealthy donors friendly with Democrats.