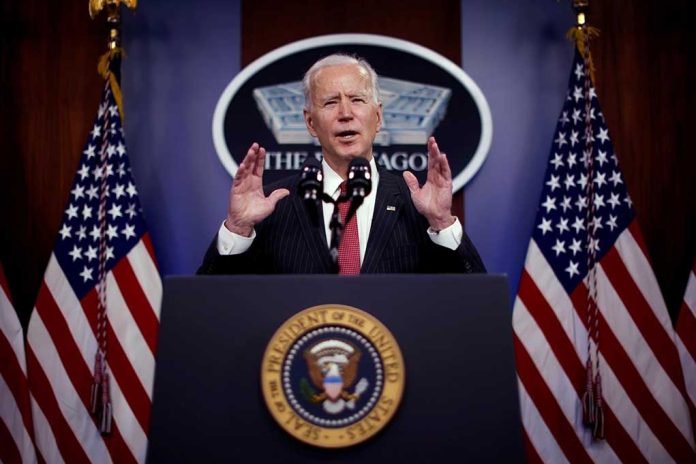 (USNewsMag.com) – In August of 2021, the US pulled all of its troops out of Afghanistan after 20 years of fighting and no positive outcome. Now President Joe Biden is allegedly thinking about getting America involved in another conflict, but this time in Eastern Europe.

According to reports, Biden is thinking about sending 5,000 US troops to Poland, Bulgaria, Romania, or Hungary to protect Ukraine from a possible Russian invasion. The troops would reportedly be from the 82nd Airborne Division at Fort Bragg, North Carolina, and pulled off existing posts in countries around the world. There aren’t any plans to send the troops directly to Ukraine, according to reports.

The US may deploy at least 1,000 to 5,000 troops to eastern Europe and the Baltic nations as the chances of an incursion into Ukraine led by Russia continues to grow.https://t.co/5Rg01LsZtn

Diplomatic talks have failed to ease tensions in the area. Vladimir Putin claims he has no plans to attack his neighbor, but US intelligence is not so sure about that. Experts believe he could launch an invasion at any time.

Stephen Miller, an ex-White House official during President Donald Trump’s administration, has criticized Biden’s Ukraine policy, saying he’s too focused on the wrong border. The commander-in-chief should, instead, pay attention to the US-Mexico border. It looks like Americans agree. A poll from Convention of States Action (COSA) and the Trafalgar Group found only one in six Americans want soldiers deployed to help Ukraine.

The POTUS hasn’t made an official decision yet, but the troops were allegedly told to be prepared to move at any moment.