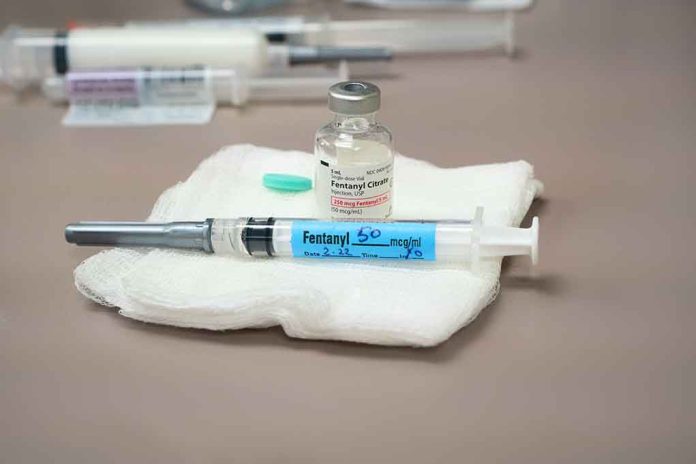 (USNewsMag.com) – America hit a grim milestone in 2021: in the 12 months ending April 2021, more than 100,000 people died from drug overdoses in the country. Lawmakers had been fighting the opioid epidemic for years, but the introduction of fentanyl made the problem much worse. However, that isn’t stopping them from trying to find ways to combat the problem now, with several state governments searching for ways to reduce the crisis.

According to a report by TIME, lawmakers in states around the country are actively considering laws to fight the epidemic in two ways. First, they want to make the penalties for dealing fentanyl tougher. The drug, a synthetic opioid the DEA says is 80-100 times stronger than morphine, has proven to be incredibly lethal. Even a dose the size of two grains of salt (two milligrams) can be fatal. Second, lawmakers are trying to help people who are addicted to drugs to get clean.

As the addiction and overdose crisis that has gripped the U.S. for two decades turns even deadlier, state governments are scrambling for ways to stem the destruction wrought by fentanyl and other synthetic opioids.https://t.co/Wwiy4cNQHx

Some lawmakers believe giving drug users free test strips would allow them to make sure the heroin they buy isn’t laced with fentanyl. It’s a possible avenue to go down in the fight against overdoses along with making Naloxone – the medication that can reverse overdoses – available to users. Ohio State Senator Steve Huffman (R) is one of the co-sponsors of Senate Bill 296 in the Buckeye State that would make both of those available to users. Dayton247 Now reported that while the conservative law-maker doesn’t agree with illegal drug use, he doesn’t want people dying from it. A similar measure failed in Florida.

Do you agree with the way lawmakers are handling the epidemic of drug overdoses?