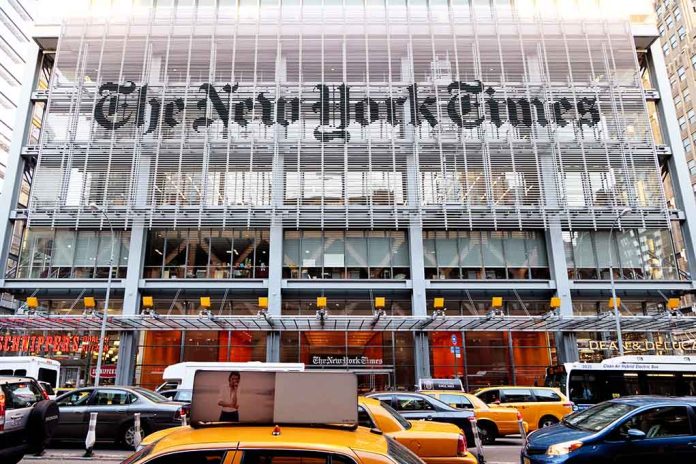 (USNewsMag.com) – Workers aligned with the New York Times union went on strike for 24 hours on Thursday. The strike came at the heels of failed negotiations between the New York Times Guild and The Times Company. It’s the first official strike to take place within the organization in more than 40 years.

The contractual agreement between both expired in March 2021, and both the union and the company have held more than 40 negotiations since then. They ultimately failed to agree on items related to salary increases, retirement plans, and health-related benefits, among other noted issues.

While there remain stark differences in opinion on how to improve workers’ conditions, Joe Kahn, the executive editor of The Times, confirmed they are willing to continue holding talks until both parties can reach an appropriate and realistic agreement. Up until this point, The Times has offered a 5.5 percent raise with a new contract, followed by 3 percent raises in 2023 and 2024. They’re also offering a 4 percent retroactive bonus to compensate for the lack of raises since the contract expired.

Fox News interviewed a bunch of New York Times employees on strike and it's just as ridiculous as you will imagine:

"We find it ridiculous that the company is maintaining its position that is has a unilateral right to call us back into the office 5 days a week." pic.twitter.com/Mm46tQ4vLB

But the unsatisfied union members want more than that – they want a 10 percent raise upon ratification, 5.5 percent raises in 2023 and 2024, and an 8.5 percent retroactive bonus. They’re also demanding a better performance rating system, as they deem the current one “discriminatory,” and more “flexible” working conditions that wouldn’t force them to come into the office a full work week. As of right now, though, The Times is only demanding workers come into the office 3 days a week.

Union members hope for change on par with inflation and a looming recession. I get that. But wouldn’t their demands be more appropriate had they sat down individually with their respective higher-ups and had these conversations privately?

Not everyone does the same work. Not everyone works the same way. Getting a raise for someone that probably puts in half the effort you put in during the year, for example, means you’re incentivizing others to slack off and demand things they don’t deserve because they know they’re going to get it anyway.

A merit-based system, in this regard, would help address these concerns. Not only does a merit-based system help apply equal, fair, and integral standards for the hiring process, but once you’re in, emphasis is placed on your skills and experience. Your yearly performance will prove whether your significant raise is justified.

Pay equity only benefits those that want the increased benefits without putting in the work required to get them. Pay equity undermines and negatively impacts those who are already making more because they worked harder and obtained the experience and skills to justify their pay.

I guess you can’t expect much else from the “Fake News” people.

If anything, give a raise to the few hundred that actually showed up to work on Thursday and completed tasks beyond their scope of responsibilities. They seem to be the ones who deserve it.

Tonight at midnight, 1,100 workers at @nytimes are going on a 24 hour strike. Here’s what you can do…

Do not engage with any of the New York Times platforms. DO NOT CROSS THE DIGITAL PICKET LINE. Get your news from other sources and tell your friends to do the same. @nyguild pic.twitter.com/Eu9Cha4aFg

“Do not engage with any of the New York Times platforms. DO NOT CROSS THE DIGITAL PICKET LINE. Get your news from other sources and tell your friends to do the same,” he said.

I completely agree with him. That’s why it is important to get news that comes from less politicized sources – or at the very least from places not committed to showing both sides of the same coin.