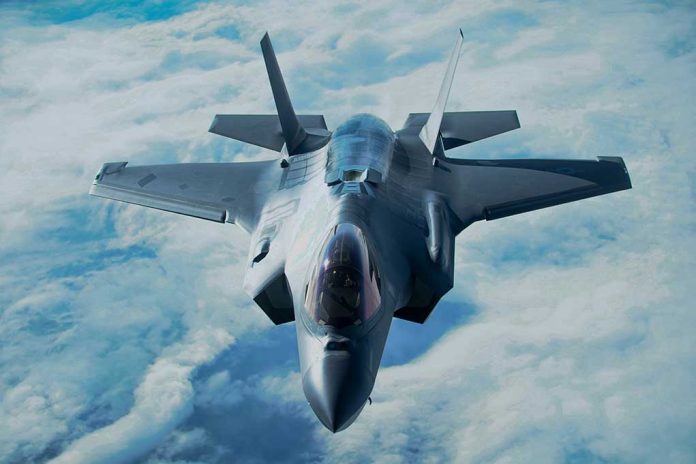 (USNewsMag.com) – Fighter pilots can find themselves in deadly danger at a moment’s notice; enemy combat, mechanical failure, or even a bird striking the aircraft can all lead to catastrophe. On October 19, an F-35A Lightning II crashed as it approached Hill Air Force Base (AFB) just south of Ogden, Utah.

The airplane was returning from a training exercise, and according to a press release from the 388th Fighter Wing Public Affairs office, the pilot safely ejected and was treated and released from a local hospital. The statement also revealed that the crash caused an 8 to 10-acre blaze that Hill AFB fire crews, along with local support, extinguished within an hour, per local news reports.

According to a military fact sheet, the Lightning II is an “all-weather, air to air and surface attack fighter” with stealth capabilities that’s slated to replace a fleet of aging airframes currently in use by the US Air Force, Navy, Marine Corps, and the Royal Air Force (RAF) of the United Kingdom. It can reach speeds of Mach 1.6 (~1,200 mph), and its combat range is unlimited with the use of in-flight refueling.

The press release stated that the cause of the crash is unknown at this time and that an interim board of officers, who will begin piecing it together, has been impaneled. The Air Force has asked members of the public to contact by calling 801-777-0911 or sending an email to [email protected] if they witnessed any part of the accident or if their home security or doorbell cameras caught any of it on video.