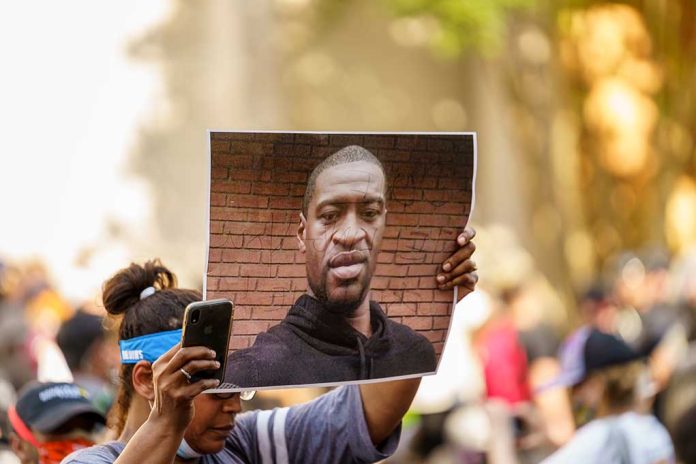 (USNewsMag.com) – Crime has been out of control in many cities across the US. Houston, Texas is no exception. The city saw a 30% increase in murders in 2021. Recently, a little girl became one of the latest victims of the crime wave in that city.

Arianna Delane, 4, suffered a gunshot wound after someone opened fire on a Houston home at 3 a.m. on New Year’s Day. Derrick Delane, the little girl’s father, told ABC 13 that his daughter was asleep upstairs when she was shot. He said his child jumped up and said, “Daddy, I’ve been hit.”

According to Delane’s family, she’s the niece of George Floyd, the man killed while in the custody of Minneapolis Police in 2020. His death set off a summer of rioting. Former officer Derek Chauvin was found guilty of causing Floyd’s death.

This is 4-year-old Arianna. She was front and center at the marches and rallies in her Uncle George Floyd’s case.

On Saturday around 3 a.m., her father tells me she was asleep in her bed when someone fired several shots at their apartment. Arianna was hit in her torso. pic.twitter.com/Cpo1oFwase

The bullet hit Delane in her torso. She suffered three broken ribs, as well as a punctured lung and liver. Her father said he’s relieved his daughter didn’t die in the shooting and doesn’t understand why someone targeted his home. In the meantime, the Houston Police Department is conducting an internal investigation regarding allegations officers didn’t arrive at the home until 7 a.m., four hours after they were called.

Statement from Police Chief @TroyFinner regarding the January 1 shooting of a 4-year-old female at 3322 Yellowstone Boulevard.

The little girl remains in the hospital recovering from her injuries.